From the Comics of the Same Name.

Well, DC Comics and Warner Bros. Studio have finally dropped their long-awaited, and highly anticipated, second big tent pole film of the year, Suicide Squad, and we are here to say that — yes — we actually quite enjoyed this film. While we are completely aware that numerous other film critics have been gloriously bashing this film, we want to assure our readership that no, we won’t be doing that, because (while we admittedly aren’t much of a reader of DC comics these days, we were quite entertained by the film, which holds up rather well throughout its two-hour run-time. 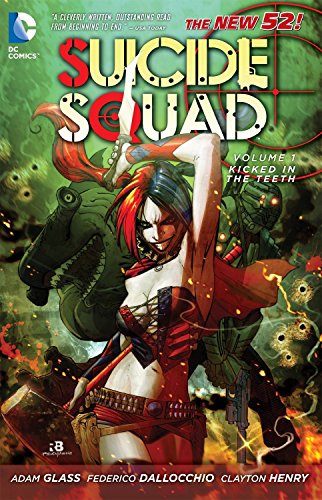 Suicide Squad Vol. 1: Kicked in the Teeth (The New 52)
As a part of the acclaimed DC Comics—The New 52 event of September 2011, writer and co-creator of the CW show Supernatural Adam Glass rolls out an all-new team of death-row super villains recruited by the government to take on missions so dangerous–they're sheer suicide! The story begins with the Suicide Squad defeated, imprisoned and being interrogated about their newest mission. Harley Quinn, King Shark, Deadshot and company must make it out alive without revealing who's pulling the strings behind their illegal operations. Who will be the first to crack under the pressure? More importantly will they make it all out alive?
Buy Now

The Rest of the DC Universe

The film takes place in cinematic DC Universe (DCU) continuity, in that it takes place sometime after the conclusion of Batman v Superman where the U.S. federal government has determined that it needs a “Plan B” to protect itself from any other meta who might be on Superman’s power level who might not be as “Mom and Apple Pie” as was Superman, so Amanda Waller (Davis) — a ruthless, high-ranking government official devises a plan to recruit the “Worst of the worst” to act as plausibly deniable assets. Okay, “recruit” is something of a misnomer. What she does is have explosive chips implanted in the necks of several violent felons in order to force them to do her bidding. (“You disobey me, you die. You try to escape, you die. You irritate or vex me... you die.”)

While we personally have some serious issues with the core concept of the team itself (imagine in the real world equivalent of recruiting Charles Manson, Ted Bundy, John Wayne Gacy, Ed Gaines, The Green River Killer, The Zodiac Killer, and The Boston Strangler as a Special Ops squad, instead of simply utilizing Seal Team Six) to get the job done, but this is a comicbook movie, so let’s forget all that and get back to it, eh?

So, Waller, with the full knowledge of the Joint Chiefs of Staff, assembles a team of the world’s most dangerous, incarcerated Super Villains, and plan on providing them with a powerful arsenal of weapons, so as to send them off on missions of great importance and national security. Needless to say, once the villains come to realize that they weren’t so much picked to actually succeed in the mission(s) assigned to them but were chosen for the government’s unique and dubious ability disavow any knowledge of their actions

As it turns out, the Squad is called up into action far sooner than anyone suspected it would be to defeat an enigmatic, other-worldly entity named Enchantress (Cara Delevingne) who has inhabited the body of Dr. June Moone who is the paramour of Col. Rick Flag (Kinnaman) who has been tasked with leading the Squad on their mission). Shortly after Enchantress assaults Midway City the Squad is assembled and dispatched to stop her. Unfortunately, no sooner do they arrive in the field then they are attacked and their helicopter is shot down. From this point forward the Squad is in hostile territory, for as they advance on their target they are constantly under attack by demon creatures that swarm them.

During their advance towards their target, this disparate group of individuals slowly coalesce into a team of (dare we say it) “heroes” who (apparently) understand unity, loyalty, and sacrifice. No, these people are not good guys, they are thieves, killers, and unrepentant sociopaths who actually enjoy being dirty, rotten scoundrels who (primarily) think only of themselves. They are not to be emulated, idolized, or otherwise revered. They are not nice people. To be sure, on-screen, they are fully-fleshed out humans, with wants, needs and desires, just like the rest of us, but they kill people and thoroughly enjoy doing it.

The Story Plays Out

Needless to say, even though these convicted criminals are described as “The worst of the worst” they are not still not quite as bad as (no spoilers here), well, you’ll just have to watch. Beyond what the trailer promises, you’ll also get to see other (albeit all too brief) glimpses of the Cinematic DCU as it begins to grow and connect to other elements out there that hint at a larger, more complex world (oh, and don’t leave as the credits begin to roll, as there is a mid-credits Easter egg trailer plopped in, just to kick-start the next film (JLA) out of the gate.

A Film Worth Seeing

So, once again, just in case you missed it in the body of this review; don’t listen to what (other) reviewers have said about this film. It is fun, entertaining, and (yes) even quite good. So if you like DC Comics, comics, superheroes supervillains, or just an action-packed film about interesting characters who are up against near-impossible odds, then yeah, you are going to want to check out Suicide Squad.

What comes Next: Justice League