In modern society, music has taken on many more forms and genres than that of 50 years ago. One man has seemed to have graced all of these genres at once. His music is described as folk, rock, gothic country, gypsy, gospel, bluegrass…He has no defining genre. What he does have is a voice that resembles a redemptive angel sent from god, and lyrical imagery that is as colourful and as soul bleeding as Nick Cave’s. His name is David Eugene Edwards.

The creative force behind former rock group '16 Horsepower', and now lead singer of 'Woven Hand', he has created a presence and rock persona that is hard to shake off. Armed with a variety of self taught instruments, that include banjos, mandolins, concertinas, accordions, and guitars, Edwards songs create a blending mix of hell fire sermons, religious imagery and theatrical stories that tell of what he sees, everything that is rotten about mankind and the world they live in. His songs create stories of a forgotten dark America, that include acts of violence from god fearing folk, and lyrics that describe the mentally of Gothic America, these include colourful anecdotes such as killing a man and picking the daisies that grow from his grave to place in his true loves hair. He sings with a snarl and with such stark honesty that no matter what the religious affiliation, music lovers from all backgrounds and cultures can feel a certain peace and redemption in how Edwards sees the world, which is largely thanks to his upbringing.

Born in Englewood, Colorado in 1968, Edwards had a strict upbringing. His father was an alcoholic who died young; his mother had a hard life. Not much is known about his mother; Edwards spent his youth being raised by his grandparents. His grandfather was a Nazarene preacher, who preached his sermons in small god loving towns, travelling from small town to small town every six months, depending on where he was needed. David followed him, and was blanketed from popular music, drugs; and any other activity that youth were involved in at that time. In some towns he was not even allowed attend the cinema because of that certain church's religious beliefs. His only source of music was the uplifting hymns in the church, and his only source of lyrical learning was hearing his grandfather speak about how Jesus Christ would rise again and redeem against those who sinned. It wasn't until his late teens that he was introduced to acts such as Bob Dylan, Joy Division and The Birthday Party, and he found himself struck by the honesty in the singer’s voices, not agreeing with their views but with how they sang them, inspiring him to become a musician and follow the same creative path.

Edwards began his musical career as a drummer, however he evolved as a musician, learning many different instruments. In 1992, when building sets for Roger Corman’s studio, he met fellow musician Pascal Humbert, and they formed the group ‘Horsepower’, recruiting jazz drummer Jean-Yves Tola. The band moved to Colorado and were joined by double bass player Kevin Soll for a duration before Humbert rejoined the group. Other members joined and left the group over the duration of their existence, including Rob Redick and Steve Taylor, but it was Edwards, Tola, and Humbert that were the core of the band. Not long after forming, they changed their name to ‘16 Horsepower’, which was inspired by the story of a widower, driving the carriage that contained the coffin of his true love to her grave, a carriage pulled by 16 horses. This kind of imagery was prime throughout their work, work that ranged from the rock driven album ‘Sackcloth n’ Ashes’ in 1996 to more subtle gospel, bluegrass, gothic country albums later in their career. Their body of work included ‘Haw’ (1996), For ‘Heaven's Sake’ (1997), ‘Coal Black Horses’ (1997), ‘The Partisan’ (1998), ‘Clogger’ (2000), and ‘Splinters’ (2001). After the millennium rifts began to form in the group, they cited spiritual unhappiness as one of the reasons, and Edwards began focusing more on his solo project, ‘Woven Hand’, a group that came more into fruitition after the demise of ’16 Horsepower’ in 2005. ‘Woven Hand’ is a replica of his former group, with the same raw energy and power of Edwards music and lyrics, performing songs written by him, and with a line up that includes Humbert along with Ordy Garrison. Their albums are deeper and more soulful, beautiful on the ear and heavy on the heart, with a discography that includes their self titled album in 2002, and other masterpieces such as ‘Consider The Birds’ (2004), ‘Ten Stones’ in (2008) and the ‘The Threshingfloor’ (2010). No matter what the name of the band or the line up, no matter whether it's a body of his own work or great covers such as 'Sinnerman', David Eugene Edwards is a musician that can stamp his musical creativity on any album he releases.

Edwards’s song writing and playing are unique, not so much in inventing new techniques but more in the methods in which he goes about creating music. His self taught style of playing instruments stem from his beginnings as a drummer, He continuously adds a rhythmical process to his melodies, constantly banging and tapping the instruments in a fluid motion. His song writing also has a method not used by many song writers, however the key to any songwriter’s technique is to develop their own, Bowie uses a method of cutting up articles and picking out words, Nick Cave is inspired by poetry and stories, Edwards inspiration is the bible. Every time he writes a song, he picks a word from the bible and writes it down; he then leaves it for a while and lets his muse naturally mould lyrics around that word. Regardless of ones beliefs, the bible has strong powerful messages and words. One can believe or disapprove the words of the bible but there’s no objection in using them for creative gain. Edwards is a Christian without the need to write Christian rock, instead he writes stories and lyrics that explode from his chosen words, his imagery naturally forming from what he has seen in his lifetime.

Edward’s is a rock preacher without a church, a drifter who roams from country to country all around the world. His stage is his alter and his followers come from all walks of life, whether they are goth metal fans in Transylvania, or hippies in Holland, no matter what the musical taste of his fans, they flock to see him play and are over awed by the power of his voice and his high energy concerts. David Eugene Edwards is a man that all music lovers must listen to, and a man who should be worthy of a place in alternative rock fame alongside the great Nick Cave. 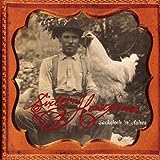