This remarkable movie is based on a true story of a community of 1200 Jews in hiding in the Belorussian woods during WWII. The history of this community was chronicled by Nechama Tec in the book Defiance: The Bielski Partisans. The story was brought beautifully to the screen by the versatile, talented, sensitive writer and director, Edward Zwick (Glory, Blood Diamond and Legends of the Fall).

The story is a gripping tale of fortitude, courage, and determination. It revolves around the four Bielski brothers, who escaped into the familiar woods near their home following the slaughter of the rest of their family. The movie focuses on the three older brothers. Oldest brother, Tuvia, is played with a deft combination of strength, dignity and vulnerability by Daniel Craig. Middle brother, Zus, is played with heart, courage and humor by Liev Schreiber. Talented Jamie Bell plays the youngest brother, Asael, who grows from boy to man in the course of the film and proves his mettle when Tuvia's strength finally wanes.

This movie is unique in that it shows us a facet of the Jewish experience during WWII that has not had much attention. Ordinarily, Jews are portrayed as victims, but this movie tells the true tale of a community of refugees determined to fight back and take revenge by living. 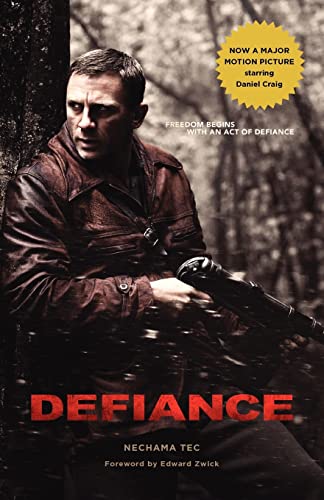 Attention to Every Detail Makes This Movie Stand Out

The movie is beautifully filmed on location in Lithuania. It took well over a year to film it because Zwick wanted to capture the changing of the seasons and wanted to film during the actual conditions that the refugees experienced. He noted that, even though he and his crew were only on site for a matter of weeks during the winter (with good shelter and down jackets) they suffered from the cold and could only imagine how the actual refugees must have suffered during the two winters that were so cold they caused the Germans to turn back from the Russian front.

Defiance was an excellent movie that held my attention in a fierce grip from start to finish. The plot was spectacular. The story was told in a straightforward and confident manner. All of the characters were skillfully and powerfully portrayed. In the commentary, Zwick makes the point that many of the character actors were actually Lithuanian actors of great acclaim. This helped to make even the smallest parts quite memorable.

The humor laced throughout the movie was surprising and refreshing. Zwick states that he wanted to make it very clear that humor, love, friendship, life, attraction and sexuality were a very big part of this community. The fact that life continued in the face of death made survival possible.

This movie was very uplifting. It gave a fresh face to familiar history. I think that it is wonderful that we are finally seeing the many facets of the Jewish population during WWII. I highly recommend this movie to others. I especially recommend it to those jaded individuals who say they are “tired of seeing the same old story about the holocaust” (as if it were set up for their amusement). Perhaps this story will give them a different perspective.

This true story was absolutely unique and original. I felt both shocked and entertained. I watched this movie three times. Once for the story, a second time to hear the director's commentary and a third time to view it with the insights gained from the commentary. I enjoyed the movie and was touched by it each and every time.

Be sure to watch the movie with the commentary because you will learn so much about the filming, the background, and so many other interesting details that make the film that much more interesting. Also, be sure to watch the bonus features, which include interviews with descendents of the Bielski brothers and other survivors of the community.

How would you rate Defiance?