The JamMan solo is an indispensible creative tool for layering guitar parts – get down drums, bass, rhythm, and while they loop solo your heart out and experiment with different lead phrases. In the right hands the JamMan becomes a band in box. 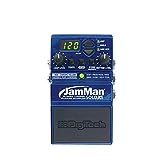 JamMan Solo - A Must Have Tool for Guitarists

The DigiTech JamMan Solo is the most affordable, easiest to use looper released by Digitech to date, coming in at just $188. As a tool for composition and practice, this little machine can advance the skills and creativity of guitar players very quickly – I only wish the technology had been available 25 years ago when I was holed up in the bedroom learning guitar.

The JamMan is a mono phrase looper that can record your guitar’s output as well as output from an external source such as an iPod, drum machine etc. and play back these recorded sections in a continuous loop, which can then be overdubbed. The upper end of RP series of multi-effects by Digitech have an onboard 20 second lopper which is useful but rather limited because you are confined to 20 sec plus you can’t have the drum machine engaged at the same time as the looper. The JamMan though can record up to 10 minutes for a single loop, allowing for whole songs to be laid down with multiple guitar parts over bass and drums.

Another great feature is the ability to load the JamMan with solos and phrases from a song that you want to learn – you can slow the passage down without changing the pitch, gradually getting up to speed as you work out the fingering. This takes the frustration out of learning those fast passages where you can’t quite translate what you hear to the fretboard. You can also speed up phrases to get a feel for what they would sound like and how they may work in a song. The entire loop can be sped up or slowed down without pitch alteration. Samples can be singled out and set to play only once in the loop. Various time signatures are available and a built in metronome with nine sounds is there to keep things in time without recording it in the loop.

The stomp box sized JamMan comes with 35 minutes recording time in its internal memory with 99 separate patches. This can be expanded to 16 hours with an additional 99 patches using the SD/SDHC card expansion slot. The optional DigiTech FS3X footswitch allows live switching of loops and lets you play different loops back to back – efficiently enough for live performances. When DigiTech developed the PDS 8000 looper pedal over twenty years ago, it looped just eight seconds of audio!

The JamMan like the RP Series of multi-effects units has a built in USB port to back up loops and settings. Loops can be organized using the free Loop Librarian software that can be downloaded from the DigiTech site. The unit also has a ¼ inch headphone output.

The playback sound quality is impressive and the JamMan is intuitive to use with a logical layout of controls. It isn’t long before the JamMan has you layering different guitar parts, building up to a complex composition and giving the feeling that you have a band in your room. As far as I’m concerned it’s a must have tool that will wildly accelerate your progress technically, as well as in composing songs. On top of that it's bags of fun to put a band together in your room using this blue box, a guitar, an amp and some effects. Check out the review on youtube below.