There is a newly discovered planet with three inteliegent species, which is unofficially named "Flyspeck", as its star lies in the Fly constellation. The Enterprise is sent to gather more data about the planet and see, if the inhabitants of the planet would like to join the Federation. And of course, everyone, mainly Captain Kirk, is working more than they should and McCoy doesn't like it. One chewing too much Kirk decided to show McCoy - and leaves him in command. It wouldn't be Star Trek, though, if something didn't happen - Kirk is lost of n the planet and Klingon Warbird appears. McCoy must use all his wits, character and help of the rest of the crew to guide them through the crisis.

I've found this book while browsing through local library and the picture on it (it's different here in Czech than it is in America) immediately caught my eye.

Doctor McCoy and commanding anyone else but the nurses an other doctors in the Enterprise sickbay? Consider me interested!

The biggest plus of this book in my eyes was it was McCoy, who was moving the plot around. Finally is our good ol' country doctor in charge! The fact that he finally realized that being a Captain is not the walk through roses he though also helps. Duane also write him so much in character that I was waiting for him to jump out of the book and start his "Dammit, I'm doctor, not a .....!" speech at me.

The other characters are also present, and are surprisingly well characterized, but the main role is still McCoy. And no one minds that, even if he's a doctor, not a centre of the whole universe, dammit!

No. 5: What I disliked about the book?

No matter how hard I try, I can't think about anything what would really be bad about this book - I enjoyed it from cover to cover, and like to return to it once in a while for a good laugh.

With whole my heart I would recommend this book to everyone who likes McCoy at least a little bit.

His character really shines through the words; there is action, humour and suspense in the plot, too! So when in need of recreational reading, try this one. Leonard Bones McCoy approves, even if "dammit, he's a doctor, not an entertainment"!

5 stars for My Rating: 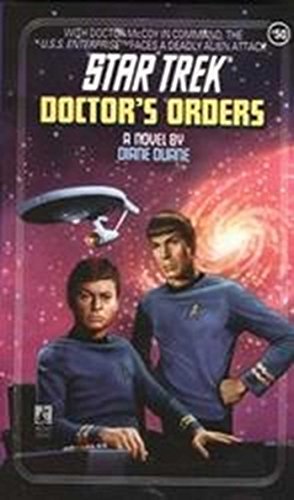