Donny and Marie---Even Better with Time

If you are, or ever have been, a fan of Donny Osmond, Marie Osmond, or The Osmond Brothers, then seeing Donny and Marie Live is something you simply must do.

Donny Osmond was my first teen idol crush. Growing up I loved the Osmond Brothers, "The Donny and Marie Show", and of course, I LOVED Donny. Seeing Donny and Marie live in Atlantic City was better than I hoped for. After all these years, it only made me more of a fan.

Before the show in the Circus Maximus Theater, three wide screens project pictures, trivia and facts about Donny and Marie. Instantly I was transformed to my younger days, recalling all I knew about the Osmond family, and smiling at facts that I didn't (like how his brothers would leave Donny behind as bait for screaming fans so they could get a head start to the limo!) I was also astounded by the depths of their careers, realizing Donny and Marie both began performing before the age of six and have now been performing for five decades!

Almost immediately, Donny jumped off the stage and into the audience, grabbing the hands and hugs of his fans. From the get-go, he and Marie fist-bumped, high-fived and even embraced the stage security guards. They also introduced many of the dancers and musicians on stage with them, showing right away that although they are world-class entertainers they have also remained down-to-earth, a quality that endears them even more to their fans.

From the opening number of "It Takes Two", Donny and Marie never stop. They sing, they dance, they crack jokes (mostly about their ages). Their voices sound better than ever and their dancing is just as good as it was in the 70's (Donny still does the same moves, right along with original Osmond Brother videos projected on the wide screen.)

An Emotional Mix of Old and New

The show is a perfect blend of nostalgia , with old videos from as far back as the Andy Williams Show melding perfectly with the performances of the live show. Marie sings "Paper Roses" live along with the video of her singing the song as a teen, and Donny sings "Let the Reason Be Love" along with a current video which includes his brothers. I found it hard not to get choked up by so many memories the show stirs; memories associated with the Osmonds, not only as a fan, but also as a connection to my own mom who passed away and loved the Osmonds, too.

Although the videos and photos venture into the past, Donny and Marie remain current in their show with renditions of popular music in addition to their own. Donny even "tweets" to fans during the show and invites some lucky ones backstage who follow him on twitter.

Donny and Marie delight the audience with everything from their popular hits of the past to an upbeat duet "A Beautiful Life" from their new album, "Donny and Marie." They perform together and each take the stage solo. Marie sings rock, ballads, jazz, country and even opera. Donny wows with all his hits through the years, including "Puppy Love" and the more recent "Soldier of Love". They also perform songs from their successful Broadway shows, including "The King and I", "The Sound of Music" and "Joseph and the Amazing Technicolor Dreamcoat", among others. And of course, they don't forget to sing the theme song from "The Donny and Marie Show".

Throughout the show, Donny and Marie interact with the audience. Donny runs up the aisles, sits on laps, and seems to be in the audience almost as much as he is on stage. Marie kisses some lucky bald heads, leaving red lipstick marks behind. Both talk with the audience before and after (and even sometimes during) every song, reminiscing, story-telling, laughing at themselves and at each other.

Via the video screens, the audience witnesses the magnitude of Donny and Marie's amazing careers. From "The Donny and Marie Show" to Donny's 59 albums to his stint as the host of the game show "Pyramid" to his win on "Dancing with the Stars", to Marie's successful doll collection, her founding of The Children's Miracle Network or her announcement of her talk show coming soon on Hallmark, one cannot help but be amazed by their success. Donny also reminds the audience that he had the Justin Bieber haircut before Justin did, and reveals that The Osmonds' "Crazy Horses" is Ozzy Osbourne's favorite rock song.

Donny and Marie's success only shines brighter when fans are reminded of hardships the Osmonds have endured, such as Donny's battle with social phobia, Marie's battle with postpartum depression and the suicide of her son. (She dedicates her opera turn to him.) Through it all, Donny and Marie continue to smile and continue to entertain.

Donny and Marie are truly talented entertainers. They can sing, they can dance, they can laugh at themselves, and they can make the audience laugh, too. Their show is a perfect mix of the past with a glimpse of the new and includes a variety of music from country to rock, opera to pop. It's a little bit country, a little bit rock and roll, and a little bit of everything else. And it's all good.

Donny and Marie do not disappoint. They look better than ever and remain approachable despite their incomparable careers. They appreciate their fans and they show it. Their show will make you laugh, make you cry and make you sing along. Above all, it will remind you of all the reasons why you became a fan of the Osmonds in the first place. They are wholesome, they are humble, they are happy, they are really talented,and they are so darn cute. 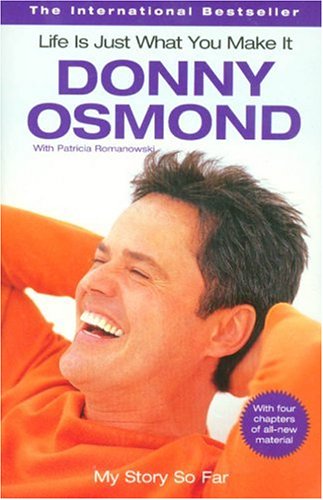 Life is Just What You Make It: My Story So Far
Buy Now

Might as Well Laugh About it Now
Buy Now