In both the film and music industries, Doris Day is a true American Icon. Born Doris Mary Ann Kappelhoff on April 3, 1924, she was a band singer for six years before noticed with the hit of her song, "Sentimental Journey" when she was just twenty-three years old.

From 1947 until 1967 Doris Day shared a successful partnership with Columbia Records, the only label she would ever work under, to produce more than 650 recordings -- spending over 450 weeks in the Top 40! Most trying to break into the music business would give their right arm for just one hit single. Few successful music groups, much less individual musicians, can boast statistics like Doris Day's.

Doris Day wasn't just a singer. she was also an accomplished actress. With girl-next-door looks enhanced by a sweet personality, who could resist the blonde, blue-eyed beauty? Equally efficient skills at performing drama, comedy, and romance gave Doris Day a wide range of roles to choose from when acting. Her career yielded an Academy Award nomination, a Golden Globe award, a Grammy Lifetime Achievement Award, and many other notable recognitions.

Using her celebrity status for good instead of personal gain, Doris Day began working as an Animal Rights activist in the 1970s. She later went on to start the Doris Day Animal League, a partner of the Humane Society. American President George W. Bush awarded her the Presidential Medal of Freedom in 2004 for selflessly giving her heart to the cause of animal welfare. 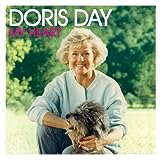 After her last hit in 1967, Doris Day quit making new material until 2011 when, at the age of eighty-seven, she released an album titled My Heart. It debuted at number nine on the U.K. Billboard charts, giving Doris Day a new achievement -- being the oldest person to ever have a top ten album there!

It's obvious that Doris Day is a true American Icon. It's obvious that old age will not slow her down any time soon. Here's hoping that 2012 yields even more success for this amazing lady, wherever her adventures lead through life!