If you liked that one, it’s because it was version #7 of the theatrical trailer. If you’ve wondered what the compendium looked like, from version #1 to version #7, then see the next Video Link. Number 7 is the one playing in the middle, followed by number 1.

Why I opted to see and write about this film

2. Christopher Nolan does a great job of filming, as some of his previous films, Interstellar and The Dark Knight Trilogy. Was wanting to see what his latest film was all about.

3. When I saw Harry Styles listed on the Movie Poster, I wanted to see what his film debut would be like. Being one of the primary influences in the band, One Direction, and having various TV series’ roles (one in Argentina), I wanted to see what other acting he could do. Coincidentally, his solo debut musical album was being re-stocked on Walmart retail shelves this week, and according to one of the BN booksellers, has been out for a few months now. The self-entitled album is pretty good, and I can see where most of One Direction’s lyrics and musical direction was influenced by Harry.
Sidenote: On his album, he provides vocals, chords, piano and lyric writing. I felt the first half of the album were slow ballads, but can see where some of his main influences are Bob Dylan, combined with NOW lyrics. The last half of the album had some pretty good tracks (#6 & #9, respectively), that had some nice beats! Looking forward to his next album. Now, let’s see what his film character Alex does on-screen. 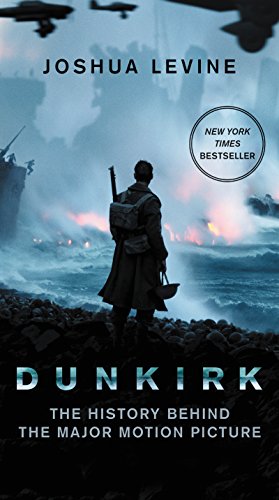 Dunkirk: The History Behind the Major Motion Picture
Buy Now

What’s the story about? (spoiler free)

From the trailer, an initial MovieFan reaction was “Is this about flying?” as most people in the audience didn’t know what this film entailed. World War I was bit before my time, too! Studying history and why the filmmakers wanted to re-create a historic event, is a great thing, as they did a fine job of not only researching the actual event before making a dramatized version, but the Producers and Director visited the actual historical site for research purposes and for filming most of the historical photographs, capturing it vividly onto 65mm and 70mm filmstock. Most of the montages you’ll see in this film have been re-created from photo archives, as well as living historians being onboard (Levine, Dunkirk: The History Behind the Major Motion Picture). In the Ending Credit Roll, it said “Shot and finished on film,” which is rare in these digital times, with an array of Special Effects and Motion Capture available.

This story is another take on Dunkirk, the historical place where the battle that began World War II occurred. British and French troops have been driven by enemy troops, and are stranded on the beach. While awaiting help from British and French joint air forces, the 400,000 men couldn’t be evacuated soon enough, as there were not enough lifeboats to handle the quantity of troops.

When you see the film, all the historical questions from the British side are answered.

A film story Q: why did the French Air Forces open fire on the men on the beach? This is seen by the trailer with Tom Hardy as Farrier, whose dialogue “I’m on him,” as he puts on the oxygen mask, and prepares to fly after the other plane.

If this got you hooked, here are some additional source materials, which will help you understand this film version of the event, and how the film was created.

After checking the movies on Opening Day…

After checking the movies on Opening Day (along with the other 2 debut Features), I’m definitely going to see this film in IMAX 2D, which happened on the next Value Tuesday.

For example, at the Regal Dole Cannery 18-plex, the films change slots, several times a week. So, let’s say that you wanted to see Dunkirk in IMAX 2D, but weren’t able to make the Opening Day’s event. No worries, the movie will be in the same slots until Tuesday’s end of day. On Wednesday, there’s normally a hybrid mix. This depends on the Feature being shown. Looking at upcoming releases for the week fo July 28th, Atomic Blonde and The Emoji Movie, I have a prediction that Dunkirk will be in the IMAX slot for a few weeks. (Postnote: prediction is true! As I produce this Hub, The Dark Tower made it to the RPX slot, but Dunkirk is still being shown in the IMAX slot going into its third week for August 4th, 2017).

Another way to see what’s being shown is to look at the Movie Posters in the Lobby. Bruce has since updated the Backlit movie posters this week, so some of the Holiday 2017 and early 2018 movies are being displayed inside the 18-plex’s lobby. In the case of the IMAX slot, there’s a special IMAX lit marquee, as you enter the lobby. This is another way to see what’s currently showing in the IMAX slot; the IMAX lit marquee doesn’t have any Upcoming Movies displayed in it.

A current example is the Hybrid occurring when there’s a Tuesday Premiere Night, with a Wednesday Opening, such as Transformers: The Last Knight. The Theatre Board, as I like to call it, mixes the films, in order to accommodate TLK’s Opening Day times, while still offering the existing titles. I like to refer to Wednesday’s as “Shifting Day,” as some of the times from the previous week still apply. You will normally find me in a theatre on this day, as I like to play catch up before the week changes again.

While the week continues on, all this occurs before Thursday Night’s Premiere Features (where the Board changes again, somewhere around 7pm-ish to closing time). Which means that Friday’s film listings and showtimes are different than any other day of the week, as this is considered the traditional Opening Day. Logistically, the Marquee scheduling is handled by the computer, which maximizes the most showtimes per Screen number, based on each film’s running time.

The longer the running time, there’s more waiting time in between Features. From an auditing perspective, this means that the Auditor gets to wait more in between checking features. This time should be used for filling in the handwritten paperwork, or entering the data online using your mobile device. Time management becomes a top priority, especially when there are multiple features to be checked, such as the 3 new features this week.

What about when there’s a shorter running time, mixed with a longer running film?

This is a great question!

From either an Auditing or Customer perspective, when the running time is about 90 minutes (plus or minus a few minutes), the PreShow and Movie Previews add some buffer to the Scheduling. This means that the Auditor gets to switch screen numbers rather quickly throughout the day; making the shift shorter.

If there were longer running Features, then it gives the auditor time to move slightly physically slower in between screen numbers. A benefit to the company is that I check-in with my audiences at the halfway point in the movie. Having viewed the Feature on Premiere Night, I usually know when the halfway point in the film story has occurred, so walking in and out of Features is not as addicting as not having viewed the Feature previously.

Putting it all together

There are times like for Dunkirk, where there’s not enough of me to go around! This feature was getting big publicity, due to its handling of the topic and media writeup in the morning newspaper, and all Theatre Auditors were pre-warned about its impact at the theatre of the day. I was already signed up to check 3 new features at the Regal Dole Cannery 18-plex, and couldn’t make the showtimes at Ward 16-plex, due to overlapping showtimes and Friday Oahu traffic.

Which is one of the main reasons why I like this business. Nothing ever stays the same. Just when you think that something is going stale, everything changes again. Hollywood is definitely not boring. It is a lot of work, even for my modest portion that I handle.

Why Dunkirk is different than other Fictionalized films

Amidst the non-fiction (aka Documentary) about D-day, I did a little research on other Fictionalized films about this topic. Two other film titles come to mind:

From reading the back cover material, it appears these two titles are fictionalized versions of what happened. If you are into this portion of World History, then by all means, go ahead and view them.

In an interview with film historian and writer Joshua Levine and Director Christopher Nolan, I learned the main reason why this film was being made into a Hollywood Movie was Director Nolan’s wanting to tell the story.

I thought Director Nolan did a great job with the Opticals in the film, showing the Land, Air and Sea military elements, which the Movie Viewer figures out later, is the timeline based on Winston Churchill’s speech of “Never Surrender.” A lot of positive comments from all audiences, ages and associated demographics, compared to similar discussions with various Theatre Managers.

Thank you to the filmmakers for your reasons to recreate history.

The Making of Dunkirk
Buy Now

If you’re curious enough about this event, there are lots of resources available in print and online, without me having to re-Hub it.

The history lesson can be found on Wikipedia, as a starting point.

The best way to learn about this topic would be to launch your favorite web engine, and type “dunkirk military history.”

Much aloha to the fans who saw the film, and also to my Social Media Fan base, who enjoy reading my Published Hubs. With your continued interest, the Hubpages Editors have given me a special metrics award of “25 Featured Hubs being attained by 3% of the Hubpages Producers.”

Until the next one, stay cool this summer and enjoy the Movies, Pam