Ed Alleyne-Johnson is a British street busker and rock musician who plays an electric violin that he carved for himself with a kitchen knife. He has been busking from the early 1980s and his music is ... well, electrifying.

Originally from Liverpool, he studied Fine Arts at Oxford University and that is where his busking career started. From those early beginnings he toured internationally through the 80's and 90's playing with such famous rock artists as David Bowie, Bob Dylan, Simple Minds, The Cure and New Model Army.

Despite playing alongside these famous bands he also worked his way around many of the biggest cities of world, playing his music on the streets. Busking would seem to be an aspect of his musical life he had no intention of giving up.

Not just a talented violin player he also composed the stunning Purple Electric Violin Concerto, which was released in 1992 and soon brought him to the attention of musician Jules Holland who gave him a slot on his BBC TV show, 'Later with Jules Holland'. The following video is taken from that appearance.

The fame of the Purple Electric Violin Concerto has now achieved cult status in many countries and, despite being classed as 'Alternative' music, this and most of his other work is readily available from Amazon. 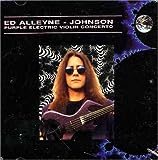 Busking on the streets of York.

But it would seem that Ed's first love was still for the streets of England's historic cities and from the dreaming spires of Oxford he went on to play in medieval Chester. Today his distinctive music can usually be heard echoing off the stone walls of the old buildings in the Viking city of York or Jorvik as the Vikings knew it.

Despite the public hurrying past, busy with their own concerns, Ed plays on impassively, lost in his world of a music that is neither wholly rock nor wholly classical, but is instead a truly original hybrid.

A first encounter with the music of Ed Alleyne-Johnson

It is likely that the majority of people have never heard of Ed Alleyne-Johnson and it is true that he is hardly a household name. Although he is not a celebrity in the modern sense of the word this does not mean that he is not worthy of mention. He is, in fact, a truly gifted and original musician rather than a product with minimal talent manufactured by some cynical Svengali and manipulated by the media. This makes him all the more unusual.

I first heard Ed's music at one of York's annual Viking Festivals in the1990s. It was nighttime and the 'Vikings' - the enthusiastic re-enactors who turn York back into a Viking city for a couple of weeks in February - were about to say goodbye to their fallen chief by burning his 'body' in his dragon-headed longboat.

After we walked with the torchlit procession through the streets of York to the open area where they fired flaming arrows into the boat, Ed's Oxford Suite No. 4 from the Purple Electric Violin Concerto rose eerily above the noise of the crowd and the hairs on the back of my neck stood up. The crowd fell suddenly silent and watched the chieftain's boat burn to this extraordinary music. It was a moment that was both bizarre and oddly moving.

When the music ended and the spell was broken I and many others went to the men operating the sound system to ask what the music was and despite the fact that nearly twenty years have passed since I first heard it, Ed Alleyne-Johnson's Purple Electric Violin Concerto still has the power to stop me in my tracks.

A truly original busker ... a man in love with music.

Since those early days Ed has continued to write music as well as giving his own unique rendition of a diverse range of both classical music, such as Pachelbel's Canon, and rock classics like Sweet Child O' Mine by Guns 'n' Roses, With or Without you by U2 and While my Guitar Gently Weeps by George Harrison.

It must be said that Ed Alleyne-Johnson remains a true one-off; a man so dedicated to his music that he still feels compelled to stand on the street corners of York to play his version of it to the passing crowds. What is even more unusual is that although few people have heard of him there are a great many videos of him performing, usually as a street busker, on YouTube.

It is apparent as one watches him play that he is in a world of his own and that fame has never interested him at all. Ed Alleyne-Johnson is simply a man content to play his music for anyone who wishes to listen to it.

He is the Banksy of the music world and on the streets his compelling music becomes a most welcome audible graffiti.