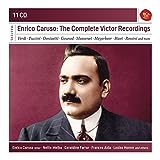 Enrico (Errico) Caruso was born on February 25, 1873 to a poor alcoholic father. He was baptized the next day at The Roman Catholic Church of San Giovanni e Paolo. Born in Naples, Italy, he was one of 7 children, and never received much primary education.

At the age of 11 Enricco took on his father's trade of repairing public water fountains.

Caruso made his operatic debut on March 15, 1895 at a back street theatre in Naples. After a two-year stint on the South Italian circuit he auditioned for Giacomo Puccini in the summer of 1897. Puccini was looking for a leading tenor for a performance of 'La Boheme' in Livorno. Puccini was so impressed with the range and tone of the young Caruso's voice, that he reportedly mumbled in awe, "Who sent you to me? God himself?" However, it was a bad reception at that performance and Enrico never played in Naples again. He said that he never return there except if he wanted some spaghetti. It was said that because he would not pay any of them to applaud, a section booed him off of the stage that night!

The great Caruso showed that he did not need them when he was paid $100,000.00 to be in "My Cousin" and "The Splendid Romance" years later.

He died too young at the age of 48 from a kidney infection. He is known today as one of the best tenors of all time.