Battling up from the streets, these gutsy geniuses became the "star Makers", turning unknown faces into household names such as Pickford, Chaplin, Garbo, Gable, Fonda, Hayworth and Bogart.

It started with Adolph Zukor "the father of motion pictures". He was just 15 when he immigrated to New York from Hungary. Zukor swept floors for a furrier at $2 per week. Four years later in 1892, he started his own fur business and prospered.

In 1902 Zukor was fascinated by a magic lantern device that projected moving pictures, or "flickers", and opened a penny arcade featuring the movies that were filmed in New York during the early part of the 20th century.

In those days, films were what we'd call "short subjects" today.

Zukor shrewdly envisioned movies as a full evening's entertainment, and decided to produce full length films with stories. He formed Famous Players in 1912, and invented the star system.

Hiring an actress named Mary Pickford, he built her popularity up and gradually raised her salary to a whopping $10,000 per week.

Adolph Zukor worked at Paramount Studios well into his 80s and died at 103.

Harry Cohn was a gutsy kid from New York's East side, born in 1891. He dropped out of school at the age of 14. But he had a good singing voice and got himself a job as a song plugger for music publishers.

In 1924, Harry formed Columbia Pictures and went on to discover screen greats Rita Hayworth and William Holden. He pumped life into Frank Sinatra's fading career by casting him in "From Here to Eternity." When he died at age 67, his estate was worth approximately $14 million.

Louis B. Mayer was born in the ghettos of Lithuania in 1885. He immigrated with his family at age 3 and opened a junk business in New York at age 19. He eventually went broke.

Mayer moved to Boston and sold tickets in a movie theater. Then he borrowed some money and took over an old New England theater. Soon he and some partners formed Metro Pictures and filmed their first movie in Brooklyn. It was a hit.

Metro moved to Hollywood, and after a series of mergers, Mayer became vice president of Metro-Goldwyn-Mayer. Under his guidance, MGM created such stars as Greta Garbo, Clark Gable, Joan Crawford, Judy Garland, mickey Rooney, Jean Harlow and many others.

Mayer could be ruthless. Judy Garland claimed he laced her food with Benzedrine, an appetite suppressant, to keep her weight down. And when Mayer's longtime confidential secretary, Dick Hanley, took his first vacation in 11 years, Mayer fired him. He died in 1957.

Samuel Goldwyn ran away from a Polish ghetto at the age of 14 with about $20 in his pocket. When he died, he was worth $20 million.

Arriving in New York in 1896, he swept floors in a glove factory for $3 per week. He worked his way up to salesman and saved $26,000. Then he formed a film company. In 1916 the company merged with Adolph Zukor's Famous Players. Goldwyn left and formed another firm, the Goldwyn Pictures Corp.

In 1922, he sold out for $1 million and became an independent producer.

In the next 37 years, he churned out many great films, including hits, "Wuthering Heights," "Guy's and Dolls," "The Best Years of Our Lives"and "Dead End".

He was famous for mangling the English language with such bizarre utterances as "keep a stiff upper chin," "include me out" and "I can tell you in two words im-possible."

Jack Warner started in the film business with his brothers Albert, Sam and Harry, on an investment of $1,000.

In 1966 Jack, the final surviving brother, sold his one-third share in Warner Bros. for $32 million.

Jack was born in 1892 the son of an Ohio Polish immigrant butcher. While in his teens, an opportunity came up to buy a motion picture projector for $1,000. He and his brothers pooled their money, and their father pawned his delivery horse.

The brother's showed "The Great Train Robbery" in a rented store, and the business took off.

Jack discovered many of the biggest stars. He shaped the careers of such stars as Gary Cooper, Humphrey Bogart, Cagney, and Edward G. Robinson.

Jack Warner was the last of the film pioneers. He died in 1978, the man who many called "The Last Tycoon." 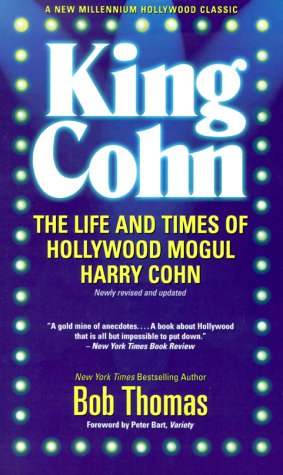 The Warner Brothers Story on Amazon

More Links To The Golden Age Of Hollywood