Frequently it's the little things that guitar players put in that make a big difference. A lot of blues men include Candy Man by Reverend Gary Davis in their song list, with various degrees of success. I have also played this particular song for many years, and just recently decided to take a closer look to find out what Davis was playing in greater detail.

Ragtime blues guitar enthusiasts will already be aware that he used just one finger and thumb when finger picking, but that's only just scratching the surface - there are many small throwaway movements that contribute to that wonderful sound.

Take a deep breath, flex those fingers and let's take a look ...

The Last Of The Masters

Reverend Gary Davis was out of the ordinary in several ways. The complexity and musical diversity of his songs are well known, and we should think ourselves to be fortunate that his skill remained undiminished in his older years. He wasn't like some blues men, who discontinued performing and then starting again after being 'discovered' , the Reverend never quit playing.

He still performed on the streets in New York until he became fashionable in the folk boom of the 60s, then starting to make records again and playing live gigs. He was always open to teach anybody that wanted to know his style, it appeared, and so his talents were passed on to students such as Stephan Grossman and others.

Before we have a good close look at the Reverend's guitar style, view out the video clip underneath and listen to some tips about practicing guitar from GaryDavis himself. 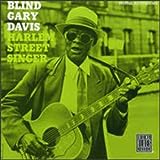 Incredibly, Gary Davis used only the thumb and fore finger of his picking hand to create all of those wonderfully rich sounds. As you can, his finger moved quickly and seemed to move independently from his thumb. He used picks, which I always find helps to be more accurate than bare fingers.

He was skilful in any key, major or minor, and in any blues style, but this wasn't the thing that made his music stand out (as far as I'm concerend.) His thumb beat timing was rock solid, as you would expect from the master, and could break away the standard alternating bass pattern , either to double up on the beat and produce complicated rhythms, or to create incredibly rapid runs on individual strings. The Reverend made his own rules! He could pluck a string alternately with his thumb and finger, just like using a plectrum. If this wasn't enough, he sang simultaneously, which is very difficult to do - try it out!

His thumb could easily jump across to the treble strings, to complete a run or a phrase, which gave the impression that more than one finger was being used. The net result was a great experience of ragtime blues guitar playing which has never been effectively duplicated.

In the embedded Youtube video underneath, I take a look at a few of these special techniques.

To finish off this article, I take a look at the special way the Reverend plays the classic song Candy Man. It's an appealing piece of ragtime blues guitar music and happens to be one of the Reverend's simplest songs, as far as structure goes. After taking a closer look though, it's not that easy after all! It's best to play Gary Davis music in the same way that he did, which is, use just using your thumb and index finger for finger picking. We need to start very slowly of course, but this is how you will develop that 'real' sound, which is exactly what we are all about.

You'll recognize at once that basic Candy Man lick, but give attention to those small jumps created by the thumb and fore finger. These little jumps,in concert with the bass alernating on just two strings, make the song what it is. Have fun and take it easy.

(There's a small mistake somewhere in the tablature - let me know if you can see it!)