If you grew up in the 1990s you'd remember the ABC Friday night block called TGIF. In the beginning, for four seasons - after ABC's Family Matters concluded - Boy Meets World captivated television audiences. Boy Meets World ran for seven seasons on the television network, ABC from 1993-2000.

Boy Meets World was a coming of age family television sitcom that centered around a young boy named Cory Matthews on his misadventures in life from a preteen to a married man. If you followed Boy Meets World you know that Topanga was Cory Matthew's childhood sweetheart who he grew up with and married in the last episode of Boy Meets World.

The series will follow thirteen years old Riley and her best friend, Maya (Sabrina Carpenter) as they start the seventh grade in New York City - where Cory and Topanga moved in the finale of Boy Meets World. Ben Savage is now a teacher and Danielle Fishel is going to be running the local and hip smoothie shop where the kids hang out.

Cornelius A. Matthews - known as Cory Matthews on Boy Meets World (BMW) - was played by Ben Savage. At the beginning of BMW, Cory Matthews was a twelve years old sixth grader who is into sports and average preteen interests, but by the end of the series, Cory has turned into a funny married man with great life values.

Topanga Lawrence (Danielle Fishel) started off as a weird little outsider girl who grew up to be an intelligent overachiever. Topanga started out as a comic relief and ended being one of the main characters and Cory's childhood sweetheart turned wife.

Girl Meets World: Yes or No?

Are you excited to see Girl Meets World in 2014? 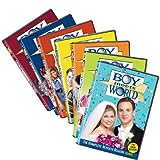 In the first season of Boy Meets World, it revolves around Cory's relationships with his family and school mates. He also begins to show a love interest in Topanga Lawrence, albeit he publicly denies it venomously.

The second season of BMW starts as Cory and his best friend, Shawn (Rider Strong), begins high school. In this season, Cory and Shawn try to become popular and almost get into fights with the school bullies. Eventually, Shawn becomes part of the popular crowd, but still maintains his friendship with Cory. After Shawn's mother leaves and his father goes after her to find her, Shawn moves in briefly with Cory's family until their English teacher decides to take Shawn in. Cory tries to make advances towards Topanga, but despite the mutual attraction, they do not date in the second season.

In the third season, Cory finally admits his feelings for Topanga, but he can't muster the courage to ask her out, so Shawn does. It's revealed that Shawn only asked Topanga out so he could trick Cory into telling Topanga his true feelings. For a few months Cory and Topanga break up because they both felt as if they've hit a standstill in their relationship. Cory follows Topanga to Disney World to win her back and they wind up back together. Cory's brother Eric (Will Friedle) invites Cory on a road trip at the end of this season after Eric isn't accepted into any colleges.

The fourth season starts with Cory coming back from his road trip with Eric. After Topanga's mother is transferred to another job 300 miles away, she runs away and comes back to Cory. Topanga's parents decides that Topanga can live with her aunt until she graduates.

In the fifth season of Boy Meets World Cory and Topanga break up after Cory lies about kissing a ski-lodge employee. Cory gets drunk with Shawn and gets thrown in jail. Afterwards, Cory vows never to drink again, but Shawn struggles with alcoholism. After experiencing a kiss from another guy, Topanga realizes the only kiss that matters was one from Cory and she forgives him. Topanga gets accepted to Yale, but decides to stay with Cory - and then she proposes. Cory's parents aren't happy about the couple being engaged so young, so they decide to elope, but at the last minute they decide to have a standard wedding with their friends and family there to witness it.

Season six starts as Cory and the gang begins college. Cory is suspended for a day for shoving one of his professors (played by Ben Savage's real brother, Fred Savage), through a glass door for making sexual advances towards Topanga. Season six broadens the story line of the other protagonists in the series.