It's a sign that you're getting old is when a movie you fondly remember watching on the big screen suddenly gets another run to celebrate 25 years. Yes "Back to the Future" has turned 25, it was released back on the 3rd July 1985 a time when body warmers were the height of fashion and helped to turn Michael J. Fox into a mega star, worshipped by boys and girls alike. It was a huge success, spawned 2 sequels, an animated TV series and even made a DeLorean seem cool.

Well now in the year 2010 yes "Back to the Future" is 25 years old and not only will it be getting another run of the big screen in October but it will also finally get released on Blu-ray with even more extras than the already released standard DVD box sets (more information on the impending release of the Blu-ray "Back to the Future" trilogy further on). Can you wait to watch Marty McFly skateboard around the town square, Doc Brown to shout "Great Scott" and the DeLorean to disappear leaving a trail of flames behind. Nope, I didn't think so, so here is a reminder of why "Back to the Future" and its sequels are quite simply brilliant.

It's the year 1985 and after a series of strange events culminating with a group of angry terrorists, Marty McFly finds himself transported back to 1955 in Doc Emmet Brown's plutonium powered DeLorean. With no plutonium to get himself back to 1985, Marty has to find Doc Brown from the past and try to convince him that he's not mad and needs his help to get back to the future. If that wasn't bad enough Marty ends up bumping into his mum and dad, well the 1955 high school versions and accidentally messes up the course of history meaning he has to sort that out or else he may never even have a future to go back to.

Back to the Future - Trailer

Having miraculously sorted out the mess in 1955 and transported back to 1985, Marty finds himself straight back in Doc Brown's time travelling DeLorean and heading off into the future. 2015 to be exact as his future son is about to make a big mistake and Marty must stop it from happening. But things don't go smoothly and whilst in the future, Biff Tannen takes the DeLorean back to 1955 and when Marty and Doc finally return to 1985 having sorted out the future, well the present is in a big mess and they are the only ones who can go back again to 1955 and sort it out.

Back to the Future Part II - Trailer

Having ended up stuck in 1955 Marty receives word from the 1985 version of Doc Brown who has ended up in 1885, living in the Wild West. With a guide to where the DeLorean can be found and instructions on how to fix it, Marty can head back to the present. Except he discovers in the history books that shortly after Doc sent the letter in 1885 he was killed by Buford 'Mad Dog' Tannen and so Marty decides that he has to also go back to 1885 to rescue his friend which isn't going to be that easy when it becomes clear that Doc Brown has fallen for local school teacher, Clara Clayton.

Back to the Future Part III - Trailer

There is no doubt that all 3 "Back to the Future" movies are some of the most popular movies to have come from the 80s and in the case of part III the early 90s. And whilst the idea of time travel had already been explored by Hollywood studios, Robert Zemeckis & Bob Gale, the talent who wrote the movies, tapped into what audiences wanted that being action, comedy and a new heart throb to lead the way.

If you look at the storyline it is essentially an adventure movie as we watch Marty and Doc go back and forth in time. But what makes it fun is using 80s know how to sort out problems in another time fuelling the audiences imagination. So for example the iconic chase scene around the town square in the first "Back to the Future", Marty makes an adhoc skateboard as he tries to elude Biff and his gang. Immediately it fires up your imagination, delivers a bit of action and also plenty of comedy. The same trick is used in the other movies, in "Back to the Future Part II" we got the hover board, a definite must have if it ever gets made, and in "Back to the Future Part III" we had the Frisbee scene. It's that combination of comedy, imagination and fantasy which helps to make all 3 "Back to the Future" crowd pleasers full of memorable scenes.

What also helps is that all three movies lead into each other, even though Part II was made a few years after Part I and saw some casting changes. It makes it one big fantastic story which takes us back and forth across time and in doing so gives us plenty of 50s nostalgia and also a look into the future which ironically then serves up a bit of faux 80s nostalgia with the 80s bar scene. Even if the storyline's in parts I & II are similar and frankly get a little messy when trying to work out what happened to who as well as when and where, it still engrossing and innocent fun.

It's also in Michael J. Fox they found a star who had cross gender appeal and as such was perfect as Marty McFly. Here was a guy whose good looks made him an immediate hit with the girls, whilst his skateboarding and willingness to take on Biff made boys want to be like him. So influential I remember back in the 80s that there was complaints that a scene which features Marty skateboarding a long a road, holding on to a jeep encouraged teenagers to try and do the same. Fox is not the only star which makes the "Back to the Future" movies so special because there is Christopher Lloyd as Doc Emmet Brown, a brilliant performances as the whacky scientist.

Even what you could call the minor characters are well played by the actors. Crispin Glover is a hoot as Marty's geeky father, Tom Wilson is comically menacing as various versions of the Tannen family and the screen lights up whenever Lea Thompson, Elisabeth Shue or Claudia Wells pops up. And who can forget James Tolkan as school principal Strickland

Add to this a top soundtrack across all 3 movies serving up some of the memorable scenes which have become engrained into popular culture. There is the Van Halen inspired version of "Johnny B. Goode" which Mary plays at the 1955 dance, ZZ Top with "Doubleback" in "Back to the Future Part III" and various background songs such as "Mr. Sandman" which really helps set the tone of 1955. Plus of course there are too major iconic songs "Back in Time" and "The Power of Love" both performed by Huey Lewis & The News.

And there you have the reasons why all 3 "Back to the Future" movies are so great. They were adventurous, comical, imaginative, memorable, full of good performances and characters as well as a great soundtrack. It's no wonder that at 25 years they are still as popular as ever.

Blu-ray "Back to the Future" Trilogy Information

October 26th 2010 - put that date in your diary, bookmark this page or pre-order at a link below because the "Back to the Future" Trilogy is coming to Blu-ray on that day or a day earlier in the UK.

As you would expect all 3 movies have been restored and will be 1080p, with an aspect ratio of 1.85:1. and audio will be 5.1 DTS-HD Master Audio. But it is the bonus features which makes this so appetising. Whilst some of the extras are those which have already featured on the excelled standard DVD box sets there is plenty of new material with "Tales from the Future:" a 6-part retrospective documentary featuring all-new interviews with Michael J. Fox, Christopher Lloyd, Lea Thompson, Director Robert Zemeckis, Producers Bob Gale and Neil Canton plus Executive Producer Steven Spielberg being one of the expected highlights. And of course being Blu-ray gives a whole host of extra functionality which will make this new release a worth while addition to your DVD collection.

So why not pre-order your copy of the "Back to the Future" Trilogy on Blu-ray today or if you haven't got a Blu-ray player why not relive the adventures of Marty McFly and Doc Brown with the equally good standard versions.

Back to the Future Trilogy - Standard

Back to the Future: The Complete Trilogy
Buy Now

Back to the Future Trilogy - Blu-ray

Back to the Future 25th Anniversary Trilogy [Blu-ray]
Buy Now 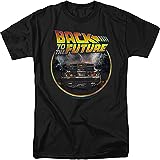 I am an out and out movie geek and movie collector who can think of nothing better than spending all day watching movies. But as well as watching movies I also review them and you can check out my full reviews of the "Back to the Future" movies on my website The Movie Scene.