In his third album to date, Shua once again releases quality underground music that will take you on a roller coaster of emotions as he deals with his inner demons through song. Named Shuacide, Shua delivers hard hitting lyrics and intense beats as you travel with him through looking for a special someone who can help keep him out of the pit that we all fall into at some point in our lives. I was expecting an album that would be quite depressing and was pleasantly surprised at the amount of positive messages in the music spread across fifteen tracks. Make no mistake though, this certainly is a dark and explicit album.

Here are five tracks that touched me in some way or had a particular message that I feel should be discussed. While each song has it's own qualities that make this album so good, some stand out more than others.

In Place has a quick and upbeat musical track with contrasting downer lyrics about feeling as though things are not going that great. And even though he's feeling down about his career and life, there's still some positive vibes coming through. "i've got mud on my face / I'm a big disgrace / and this world is a ****ed up place / all i can do is try / everyday until i die / Lessen the pain of the world / makin' baby girl cry."

Even though things don't seem to be working out, he's not giving up. It may never end up the way he wants, but everyday he's going to fight to make the world better and get his message out there.

Desolate switches gears to a more downer song, feeling very alone in the world. Shua speaks about falling for people too quickly and getting hurt in the end and at times feels like giving up on life rather than face the feeling of desolation. But the refrain brings up the mood considerably pointing out that there is someone out there for everyone, waiting for you. Somewhere in the world is someone waiting for you to find them and removing yourself from the world is not the answer.

Everyone gets depressed at times, especially after a long period of not having someone in life to come home to. But the message is clear, you will meet the right person in time and you have to keep fighting through the rough times when you feel alone in the world.

Quite possibly the most uplifting, in its own way, track Shua has written, Shuacide speaks about our inner demons and being in our own dark abyss'. And Shua is there to help us scrape and claw our way out, It's a call to arms for us to slay our personal demons doing whatever is necessary. Shua fights his inner turmoil through music and I fight through writing and occasionally programming. It's a way to get those frustrations and fears out, exposing them to others to leave the demons helpless. "Take back control / Make them commit suicide / Fight fire with fire / I call this tactic Shuacide"

The track also brings out a much needed message for the world. Mental illness is running rampant in the world as we learn more about ourselves and the inner workings of the human brain and what effects it has on the way we think, the actions we take, and even how it effects the body itself. And far too many people do not think of mental illness as a problem; to them its something they need to just suppress and move on. In reality, it's like telling a cancer patient to just walk it off instead of seeking treatment. We dismiss and deride mental illness instead of urging people to get help.

In a considerable departure from the rest of the album, Animalism goes fully hedonistic. Much like Reptile from the Great Below album, this is a very sexual track. Unlike Reptile, Animalistic is considerably more female positive. Shua gives into the carnal side that everyone has. Everyone wants a passionate partner and wants someone who is good in the bedroom. It's a rather dirty and filthy song, but we all have that side to us that is usually repressed to varying levels. What I like about the song is there isn't much of a particular message about it, it is pure expression of that bestial nature that lurks below the surface.

The final track of the album, This Little Pill largely features a woman talking about taking medication to feel normal. "Am I happy? No. Do I feel happy? Mostly. I'm just one more away from being normal again." As someone who takes medication for anxiety and depression, This Little Pill speaks to me on a personal level. What the woman says reflect things that I think about. Medications aren't really making me happy, they just help me tolerate it by altering brain chemistry, which I kind of hate. "Now that I've started, I don't know how I'll live without it. Dependence has become a part of me." I've tried going without the medication and I end up far worse than I was before I started taking it. Dependence truly has become a part of me.

Overall, Shuacide is an excellent album. It is personally my least favorite of the three released thus far, but it is still extremely well done and thoughtful with its messages. There are some very catchy songs that will get stuck in your head, including the titular "Shuacide" track and frankly, it's nice to see that Shua doesn't seem quite as angry at the world with this album. I believe his career is on the right path and it reflects in the lyrics of his music. There's still some rage being vented such as in The Machine, but his personal life seems to have improved since the previous album and as a fan of the artist, that makes me happy for him. I give the album 4 stars.

Every Dog Has His Day - Shua 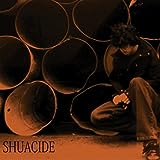