If you're anything like me, you've been looking for a list of horror movies like 'Paranormal Activity' and that search has brought you here. Well, fear not fellow horror movie enthusiasts, that search is over. Here I have selected the best in 'found footage' supernatural horror. Unlike some lists that claim to suggest horror movies like 'Paranormal Activity', but do no such thing, you won't find zombies or aliens or any other 'found footage' sub-genres; just supernatural horror.

What is it about this genre that we love so much? Firstly, it's the 'point of view' story telling; it puts us right in the character's shoes and means we're right there joining them for the terrifying ride. Secondly, as in the case of 'Paranormal Activity', the movies take place in the homes of the characters; a place they are meant to be safe, yet where they inevitably find themselves far from it as they are terrorized by an apparently supernatural menace. 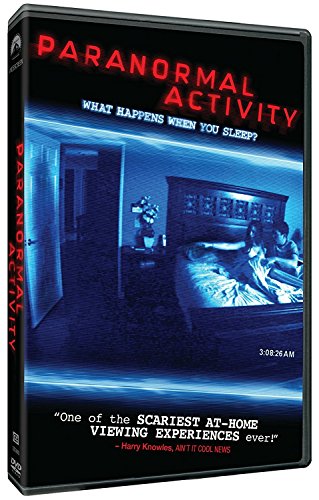 The 'found footage' genre may have reached a peak with movies like 'The Blair Project' but it is also much maligned as so many film-makers flooded the market with mediocre knock offs that were just meant to cash-in on the success of predecessors. No matter what some may say about 'found footage' horror movies, there is no doubt that this genre has an immense following and much of the credit for that in recent years can go to the 'Paranormal Activity' series.

Very much like the influx of 'Blair Witch' imitations, 'Paranormal Activity' has seen it's own legion of imitations, and trust me, as someone who has had to sit through them, I have wanted to sue the movie-makers for the hours of my life I wasted. But they were not all bad and so below (in alphabetical order) you will find the ones that I liked.

WARNING: Some viewer's, especially if not familiar with this genre, may find the video trailer's of the movies disturbing.

Which 'Paranormal Activity' was your favorite?

This story is quite similar to 'Paranormal Activity' as it takes place in a family home where a father and his children are being besieged by unexplained phenomena. But rather than investigating the situation alone, he calls in a group of investigators specializing in parapsychology and the story is told via the recording equipment they bring and set up in an attempt to get to the bottom of what is happening in this family's home.

What I like in a good movie, especially in this genre is a story line that works and most importantly, the suspense and the jumps! So, this movie makes the list because the suspense was ratcheted up and there were a fair few jumps there, which I enjoyed.

Death of a Ghost Hunter

There's something very Amityville-ish about the house in this movie, after all it has a blood-drenched past because of the gruesome murders which took place there. A famous ghost hunter takes up the challenge to investigate the home and the events that took place there, and by the name of the title, we know before hand that things are not going to go as well as she had hoped.

Right, let me get the negatives out of the way first; the acting is atrocious and the 'surprise' behind one character is so obvious right from the start. It makes me wonder about what a masterpiece this could have been if they had just tightened up the story and the script and gotten actors that could...well, act. So why is this movie on the list? For the simple reason that it actually had parts that did what a horror movie is supposed to do; it scared me.

In contrast to 'Death of a Ghost Hunter' this movie has excellent acting! The name is derived from the 'Grave Encounters' show which is a reality television show and the movie revolves around their attempt at filming in an abandoned building which was once an insane asylum.

I thoroughly enjoyed this movie which starts of a little slow and very soon cranks up the thrills and scares before it has you running at full speed screaming for your life alongside the characters. Don't be put off by the slow beginning and the cheesy production team shots as this is actually one of the better films in this genre.

A sequel to this movie was released and while it is not quite as good as the first part, it is worth a watch.

The title of this movie refers to the fact that a preacher is demonstrating what will be his last exorcism for a television documentary production team. He has made a career out of faking exorcisms and now he wants to come clean and leave it all behind, but only after he has exposed what he and others like him regularly do to innocent people. The team will film the preacher as he takes on the case of an apparently possessed teenage girl on the farm of her devoutly religious family.

This movie has a great story. Forget what you think the movie will be about, forget what you think you know, just leave it all outside and go on the trip this movie takes you on. I feel this movie was marketed in a way that did it a complete disservice; it was dressed up as something it is not, hence almost guaranteeing a disappointed audience. If you watch this fascinating, suspenseful and at times extremely creepy movie on its own merits, there is much to enjoy here.

This movie is different from 'Paranormal Activity' and the other movies on this list because it is an anthology of 'found footage' stories, told within a larger story. Confused? Don't be. The main story begins with the antics of a nasty little group of criminal delinquents who enjoy filming the way they menace society. They are hired to break into a house for the sole purpose of stealing a certain VHS tape. However, what they find are dozens of tapes and so they try to go through them to find the correct one. The films they watch are all 'found footage' and they make up the anthology of short films.

I have to say that this is one of the best films I watched in 2012. They've tried to do something new with the genre here, which is great and as each short story has a different director, they all have a unique feel to them. Just about every tool with which we record our daily lives has been used in this movie, which is very clever. Be warned though, it can get downright disturbing at times.