How Old is Cher? Ancient in Hollywood Years!

If Cher could turn back time, she would find a way faster than you can say “Sonny Bono.”

No woman is fond of the idea of getting old and losing those youthful good looks. Mature celebrities who were once starlets tend fight off the effects of aging far more venomously than the average Oil of Voile junkie.

Cher has pushed this phenomenon so far as to put herself in a new league. She refuses to grow old gracefully and it’s starting to get embarrassing. When asked about getting older in showbiz by Oprah Winfrey, Cher commented, “I think it sucks.” Tina Turner who sat next to her and is seven her senior added: "That number doesn't mean a thing. It just doesn't." Clearly even her colleagues are more accepting of the inevitable.

In another interview Cher stated: “Everyone says I am terrified of getting old, but the truth is that in my job becoming old and becoming extinct are one and the same thing. And becoming obsolete and useless is completely unattractive to me.” 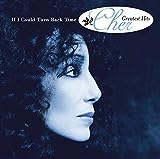 If I Could Turn Back Time - Cher's Greatest Hits
Buy Now

Cher is the self-admitted spokesmodel for women that seek to stay forever young through surgery. Historically it works out well before the diminishing returns set in. Before long plastic surgery addicts are in danger of looking like cat woman Jocelyn Wildenstein.

She has confessed to getting rhinoplasty (nose job), a face lift, as well as procedures to improve the appearance of her teeth and breasts. The nose job was the first procedure. Apparently Cher wasn’t fond of how she appeared on screen when debuting as an actor in the 60s. She was “all nose.” She had breast augmentation done after giving birth to Chastity. Her bust line increased substantially during this time and she didn’t want to “see them deflate.”
Rumours that she had cheek implants and a rib removed were rejected by Cher. She was stunned at first by the silly rib removal claim but has been defending it for much of her career.

Cher has justified the plastic surgery by claiming she had to do it in order to stay relevant in the highly competitive pop music industry. With media whoring stars like Lady Gaga out there, perhaps she is right.

Jodie Foster slammed Cher for losing the battle against aging way back in 2005. She admitted to noticing changes when glancing in the mirror but refused to behave like Cher by going under the knife.

Despite numerous claims to call it quits, Cher always seems to pull herself out of retirement. This year the 64 year old announced that she will be hitting the road once her contract expires at Caesars Palace's The Colosseum in Las Vegas.

The singer was asked about touring year prior and quipped: "My boobs would be down to my kneecaps and I would be toothless. So I don't think it is really a good idea to keep touring."