How To Train Your Dragon Live Spectacular

How to Train Your Dragon was an animated film from Dreamworks that came out in 2010. The effects were amazing and the animations flawless. With such a great tail on dragons they didn't want to end it without a bang. That bang was the How To Train Your Dragon Live Spectacular! The show was extremely detailed and well produced bringing many different aspects of the performing arts together to be the front runner in live entertainment. Between the top notch actors and the amazing robotic dragons the show really left the viewer feeling they are there as the events of the show happen. With a lot of visual effects, fire, and precise timing on sound effects the show leaves you with a thrilling once in a lifetime experience.

Would you go see How To Train Your Dragon Live?

What really made this show about dragons pop? Simply, they are big. How big? The whole stage was a projection screen the size of three total IMAX theaters. Two under the actors feet and one in the back total. Using these large worldclass screens produced by HP and Vizio the action was shown in a way no other play ever was. It wasn't just this large screen area the made the event so epic, it was the large flying Dragons. In total there was 28 different dragons at all different sizes. Massive works of art that were lifelike. Toothless had so many hydraulics in him that he could even make his many face expressions. These hydraulics made all the dragons move seamlessly around the arena and even had realistic footsteps on the ground. Not only did the Dragons walk around on the floor, but thanks to a massive upside down monorail system the size of a football field - the Dragons Actually Flew Around The Area! This we truly an awe-inspiring event as large beasts big enough to eat half the audience flew at speeds never before possible.

The cast for this show truly was a talented lot indeed. More then just wonderful voice acting many of the actors did thrilling moves like backflips. Between the karate fighting style for Astrid and the crazy hip hop dance moves of the two brothers it was realistic and entertaining at the same time. Not only was the cast talented interacting with their bodies, but many did dances and scenes with others that just were truly difficult feats. Every move was perfectly executed and carried out.

The Story is Clearly Followed

Using different elements of stage performance the storyline is carried out though many different ways. Rather then just depending on the background screens and the actors to move the story onward they used many different effects. They set a scene up with lights for the boating scene for instance. Also using a shadow show to keep the story flowing gave each part of the story a unique perspective to keep you en-thrilled and wondering whats next. A good show lies on a good story and a good story is one clearly followed part to part.

Take all the actors and the abilities they have and take the stunning robotic dragons and advanced projection on the screens and the result is something awesome. Mixed with sound and music and special effects like fire and bubbles the show turns out to be a Spectacular! Hopefully you will be lucky enough to see it before they stop the tour! I know it was well worth seeing and is a mid-ground for best live entertainment show ever! There is only a limited amount of time to see it and its great for the whole family. 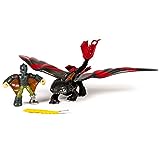 How to Train Your Dragon Live Spectacular Trailer