I Am Legend Movies

There are at least three movies based on the Richard Matheson 1954 novel, “I Am Legend”. The three movies are “The Last Man on Earth” (1964), “The Omega Man” (1971), and “I Am Legend” (2007). The movies have interesting similarities to each other and other movies. There are also interesting differences. Each movie reflects its time. Each is set a couple of years after its release. They all used A list actors in the lead role. This article contains spoilers. 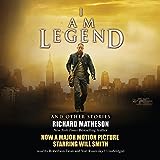 I Am Legend and Other Stories
Buy Now

Warner Brothers released this “I am Legend” in the United States on December 14, 2007.[i] The opening scene is set in Manhattan, New York on December 2009. This meant the movie could get the Christmas audience. The city’s Christmas decorations gave it the Christmas movie touch. The joyous decorations gave a sharp contrast to the movie’s events. The movie cost $150 million to make and grossed over $585 million. [ii]

The opening scene is a flashback. The movie is set in 2012. Lieutenant Colonel Robert Neville (Will Smith) is the last non-infected human in Manhattan and probably the world. The other humans behave like the zombies in the 2013 movie “World War Z”. They are fast, clever, vicious, and cannibalistic. As in the other movies based on the book, these humans can’t go out into the sunlight.

The puppy is now grown. Neville is in his upscale apartment. He has a Time Magazine cover, with his picture on it, on his refrigerator. He sends out a daily radio message saying he will be at the waterfront every day when the sun is at the midpoint in the sky. He talks to mannequins. The radio message and mannequins are reminiscent of “The World, The Flesh and The Devil” (1959).

Neville also has a sophisticated laboratory in his apartment. His routine was to test some infected rats. If any of the rats survived and showed a reversal of the effects of the virus then he would proceed to human tests. He would capture one of the infected humans for testing. He has done this many times and all previous subjects died in the tests.

In a fierce battle, where Neville uses his vehicle as his primary weapon, Neville is trapped and semi-conscious. Anna (Alice Braga), rescues him. She heard his radio messages and came from Ireland with Ethan (Charlie Tahan), who was about 10.

The infected humans were non-verbal so it’s inconclusive if they were beyond any rational thought or viewed Neville as a mass murderer who they shouldn’t believe.

In this 1971 movie a biological weapon devastated the human race. During a Sino-Soviet War the combatants used biological weapons. The contagion spread to the rest of the world. Martial Law is declared in the United States and anyone on the road without a valid pass is subject to summary execution. Colonel (Dr.) Robert Neville (Charlton Heston) was transporting the only example of an experimental vaccine by helicopter. The pilot came down with the disease and died within moments. Neville came down with the disease moments later. The helicopter crashed but Neville survived. He injected himself with the vaccine. This made him the only person who was immune from the virus that destroyed most of the human race. A calendar gives the time of the civilization’s destruction as March 1975. Neville apparently had no family, or dog, in this version.

The movie opens with Neville riding in a convertible through the streets of a deserted city. He has “A Summer Place” playing on his 8-track. He spots a figure moving in an office building and fires at it with a machinegun. He blows a tire so he goes to a car dealership and takes one of the cars. He has a conversation with an invisible car dealer. He goes to a movie theater and watches the film “Woodstock”. He gets out of the theater and hears a payphone ringing. He has to yell himself back to reality. The ringing phone is all in his head.

It is getting dark so Neville has to hurry home. When he gets home there are some members of “The Family” waiting in ambush. Neville kills three of them and gets into his secure house. The disease either killed its victims within minutes or they go into a slow death. With the slow death the victims become albinos and psychopaths. “The Family” are suffering the slow death. Matthias (Anthony Zerbe), a former newscaster, is the leader of “The Family”. Matthias believes technology is evil. He forbids the use of modern weapons. One of The Family is Zachary (Lincoln Kilpatrick), an African-American man. When Zachary referred to Neville’s house as a “honkey paradise” Matthias rebuked him by explaining Zachary had to let go of the old hatreds. They are all equal now.

Neville has given up trying to cure the diseased survivors. Neville has been unsuccessfully looking for where Matthias and his followers stay in the daytime. During one of his searches he sees Lisa (Rosalind Cash). She doesn’t appear infected. She runs away and Neville isn’t able to catch her. Matthias and his followers capture him. Matthias holds a kangaroo court then sentences him to a ritualistic death by burning.

Lisa and Dutch (Paul Koslo) rescue Neville. Lisa is a tough, African-American, woman in the mold of the women in the blaxploitation movies of the era. Dutch was a medical student. They are the adults in a small group of survivors. Dutch explained to Neville children have some resistance to the disease. Eventually they will turn albino and psychopathic, then die the same as Matthias and his group. Children with some resistance to the disease is reminiscent of the 1966 Star Trek episode “Miri”.[i]

Lisa and Dutch saved Neville so he could save Lisa’s younger brother Richie (Eric Laneuville). Neville is able to reverse Richie’s condition and make him immune. The plan is for Neville to use his and Richie’s blood to methodically cure the others in the group.

“The Omega Man” is an excellent time capsule movie. It highlighted the Sino-Soviet split which was heating up at the time. Dutch has an image of an obscene gesture on the back of his jacket. A word used as a racial slur was made into a joke. There was a joke made about birth control pills. The movie has a bedroom scene between Charlton Heston and Rosalind Cash. There was no overt political message about the interracial scene. In 1971 this was very political. Despite nudity “The Omega Man” received a PG rating in the United States.

[i] In this episode children were immune to the disease until they reach puberty. Then they become diseased, demented, and die.

The Last Man on Earth

This 1964 movie is an Italian/American collaboration. Dr. Robert Morgan (Vincent Price) has a wife, Virginia (Emma Danieli) and young daughter Kathy (Christi). There is a virus sweeping through Europe. A newspaper telling the news that the virus is airborne has numerous grammatical errors.[i] Is this meant to show the newspaper edition was sent out in a rush without proper editing? Was the dummy newspaper made up by someone who didn’t have a good command of English? Such errors happen in foreign made movies.[ii] Dr. Morgan knows it’s a matter of time before the virus reaches the United States.

Those who die are immediately taken to a large pit and burned. Kathy falls ill and Dr. Morgan insists they don’t call a doctor. Dr. Morgan knows there is nothing the doctors can do for her. One night he comes home and learns Virginia called the doctor. Kathy died and was taken to the pit. Dr. Morgan feverishly tries to retrieve Kathy’s body. When Dr. Morgan reaches the pit, a soldier stops him. Dr. Morgan exclaims his daughter is down there. The soldier retorts, “Mister a lot of daughters are down there, including my own.” Soon his wife dies and instead of turning in her body for burning he buried her. There is a sequence where she comes back as a vampire. It’s uncertain if Dr. Morgan is imagining or remembering. As with subsequent movies the backstory is told flashback.

Dr. Morgan lives in a modest house that shows clear signs of external damage and is disorganized on the inside. Dr. Morgan approaches the day like a worker in a routine job. The alarm goes off at 6 AM. The wall calendar is for December 1965. The wall has hand drawn calendars that show it is Thursday, September 5, 1969. He narrates his thoughts. He puts gas in the generator in his garage. He puts out a radio call but there is no reply. He has breakfast. He takes inventory of what he needs.

He collects a couple of vampires that were killed by other vampires during the night. He takes them to the pit and burns them. He picks up some fresh garlic from a supermarket cooler and some mirrors from a store. Then he goes on a search for sleeping vampires. He kills the vampires he finds. His search is methodical he has a wall map where he marks off the sections of the city he has searched.

Every night vampires, led by Ben who is a vampire, try to break into his house. The vampires are vocal but not intelligent. They move like classic zombies.

Dr. Morgan finds a dog. He looks forward to the companionship. He tests the dog’s blood and learns the dog is infected. He stakes the dog.

Dr. Morgan sees a woman, Ruth Collins (France Bettoia), who first tries to run from him. Her purpose is to spy on him to see what he knows. Dr. Morgan surmises he was immune because he was bitten by a bat years before the plague and his body may have built up anti-bodies. Ruth tells Dr. Morgan he is a “legend” to her group. Ruth’s group sees him as a “monster”. Her group has a treatment for the disease. The treatment requires periodic injections to keep the disease in check. Many of the people Dr. Morgan staked and burned were members of Ruth’s group. Members of her group were planning to kill Dr. Morgan, and the vampires, that night.

Which version of "I Am legend" do you prefer?