In Flames are a melodic death metal band from Gothenburng, Sweden. They have pioneered the so-called Gothenburng metal sound combining aggressive riffing, big vocal choruses and additional keyboards and synthetic sounds. The band has recoded 10 albums since they were established in 1993 and is currently one of the biggest names in extreme metal, topping charts, receiving awards and headlining shows all over the world.

In Flames are a band that has its own style and brand of metal that has inspired a wave of followers. Anders Friden's vocal style is characterized with screaming-style singing, death growls and the occasional clean vocals with a lot of harmonies and backing vocals, especially for the choruses. The guitar work is heavily harmonized and complemented by the synthetic elements. Since Reroute To Remain their fan base has been split because some of them didn't approve of the band's musical style evolving into more melodic and memorable compositions with metalcore and alternative metal influences instead of going into the darker and more aggressive sound of their earlier releases. On the whole, the change in direction has redefined who In Flames are and has made them a household name in extreme metal and rock.

*was a drummer for the first three years 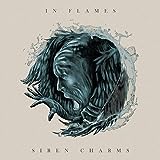 In Flames was founded by Jesper Strömblad in the beginning of the 90s as a side project while playing in Ceremonial Oath exploring a more melodic side of death metal. In 1993 Strömblad quit Ceremonial Oath and focused entirely on In Flames recruiting Glenn Ljungström (guitar) and Johan Larsson (bass). They recorded their debut Lunar Strain and had Mikael Stanne from Dark Tranquility do the vocals as a session member and quickly followed it with Subterranean with Henke Forss assuming temporary vocal duties. The second release created a serious following for the band which landed them a contract with the famous metal label Nuclear Blast.

In 1995 the band assembled their first permanent line-up with the now iconic Anders Friden (vocals) and Niclas Engelin (guitar) and went on to record their first record for the German metal label Nuclear Blast - The Jester Race. It helped the band continue growing in popularity and the stability in terms of musicians playing in the band helped the band get on the road and start building up their fanbase. In 1997 the band recorded and released Whoracle and after another line-up shuffle, the band ended up with its most successful formation with Bjorn Gelotte taking up guitar duties from Niclas Engelin and Peter Iwers (bass) and Daniel Svensson (drums) joining them. The Swedes continued to tour unrelentlessly and continued to refine their own breed of melodic death metal, gaining bigger and bigger fanbase with their following albums Colony (1999) and Clayman (2000). With growing popularity, confidence and their constantly improving ability to write memorable metal anthems, it was already evident especially with Clayman that the band is not afraid to experiment and explore new territories with their sound.

The Stylistic Shift And The Following Commercial Breakthrough

In 2002 the band recorded and released one of their most controversial releases - their sixth studio album Reroute To Remain. This time the band didn't use the services of Frederik Nordstrom as producers and rented a house in Denmark to record with Daniel Bergstrand. The album was a major change for the band and despite alienating some of the older fans, the band's following grew much stronger with the band incorporating more clean vocals, more melodic choruses, more electronics and less death growls. The album was followed by Soundtrack To Your Escape in 2004, which became the biggest achievement of the band so far selling 100,000 copies in the US and landing the band at number 2 in the Swedish singles charts with the track The Quiet Place. The ensuing tour was the biggest for the band up to date and saw mainly sold-out show all over Europe, North America, Japan and Australia. The release was supported by four promotional videos for the tracks The Quiet Place, My Sweet Shadow, F(r)iend, and Touch Of Red.

In 2005 the band released their first DVD box-set, which included various footage from their 2004 tour cycle and recorded their eight studio album Come Clarity which was released through the bands new label for North America Ferret Music and trough Nuclear Blast in Europe and the rest of the world. In Flames continued to enjoy significant popularity and in 2008 released their ninth studio album A Sense Of Purpose, which was recorded in the band's newly constructed IF Studio in Sweden. The album was once more a great success and the band enjoyed releasing videos, topping charts and amazing sales all over the world. Unfortunately, their hectic touring schedule and life on the road took its toll on the founding member Jesper Stromblad, who had to miss a few touring legs due to alcohol rehabilitation programs he had to undergo. In Flames continued to reach places they had never played before with session guitar players and soon it was evident that founding member Jesper Stromblad would have to leave the band at the high of their carrier in order to concentrate on his recovery. He was replaced by ex-In Flames member Niclas Engelin and the band recorded their tenth studio album Sounds Of A Playground Fading, which was also followed by an extensive touring campaign.