Karen Carpenter, the half of brother-sister tandem that immortalized the middle-of-the-road (MOR) songs, or you can call it love songs or ballads that continue to be the “earworms” of this generation. The cult following of The Carpenters reached into the immortalization of their songs. Richard Carpenter even commissioned the service of a Filipina singer, Claire de la Fuente, to continue the legacy that Karen had left to her fans. Claire’s voice is so similar to Karen’s that Richard opted to take her into concert tour these days.

Since her untimely death in the 80s, I grew up with The Carpenters’ songs literally. Top of the World became the anthem of my childhood whenever family gathering. My elder sister used to cherish every songs in our long playing (LP) vinyl album and their Christmas album, too. I almost know all their songs by heart, but just humming the tune or singing the choruses.

Don’t Cry For Me Argentina was the song I memorized in 1983 for the UN (United Nations Organization) celebration in October during my elementary grades. I think this is also included in their album before Karen succumbed to the effects of anorexia nervosa.

Recently, I bought of copy of a karaoke compilation of their songs. Karen Karpenter’s voice reverberate in every song in the album. It is original and not a ‘ghost singer’. I saw the transformation of her physical attributes as the song change, from a healthy woman to a thin, frail, ghostly-looking singer.

But Karen's golden voice is undeniably her undying asset that's why most of her fans crave for her songs on the radio.

She's not only a singer but also a prolific drummer. The ups and down of her career, the failure of her marriage and all, didn't hamper her fans around the world to like her all the most.

What else can I say? What if we listen to her songs and internalize the boundless meanings that we can identified with.

The Carpenters - Top Of The World c/o b38c 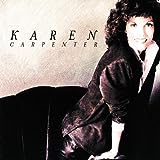 Among the most 'wanted' voices that are being sorted to replace and continue the legacy of Karen Carpenter, her brother Richard Carpenter is courting the Filipina singer, Claire de la Fuente  to be the vocalist of The Carpenters.

Claire de la Fuente started her singing career, since college days, in the 80s and produced hit songs that named her as one of the 'Jukebox Queens' in the Philippine music industry.

Right now, Claire is busy touring with Richard Carpenter and his band in many key cities in the US and Canada. The Carpenter fans around the world are waiting for the much-anticipated album that will showcase the talent of Claire de la Fuente, dubbed as the "Karen Carpenter of the Philippines".

Earlier this year, Richard Carpenter personally promoted their series of concert tour and guested in musical shows on television stations in the country.

Although, Ms. Claire is already a successful businesswoman, she still crave to be in the music industry. And that's what Karen fans are waiting for and hers, too.

There's no comparison. The resemblance of that golden voice of Karen will live in the persona of Claire as a singer.