Kate Winslet, a Great Actress and a Great Singer Too

Kate Winslet as Rose in Titanic

Many of us didn’t know that Kate Winslet is not only a great award-winning actress but is a great singer as well. Sometime in 2004, I have heard a beautiful song entitled “What If”. Since I’ve heard it on the radio, it has never left my mind and became one of my favorite songs. It is such a beautiful song about a lost love, of wondering if there could have been any difference if two people have not given up on their love.

But I was having difficulty that time to find the song’s album. And so I almost forgot it. Now, after so many years, I was trying to gather all my favorite songs in a playlist and I remembered that beautiful song again. I’ve searched the net to find the song’s MP3. To my surprise, it was Kate Winslet, the actress who sang the song. All along, I thought it was just a young budding singer with the same name as hers. It is amazing for her to be able to sing a song with really high notes.

The song was one of the music theme in 2001 animated film “Christmas Carol: The Movie” where Kate did the voice for the character Belle. She did the voice work along with other stars like Nicholas Cage, Jane Horrocks and Simon Callow. The song was produced and written by Steve Mac who also wrote songs for Westlife, Boyzone and 5ive.

It was the only song released as a single from the original music soundtrack which proceeds went to children’s cancer charities as per Kate’s request. The song is a Europe-wide hit, ranked number one in Austria, Belgium and Ireland’s music charts. It was also one of the top 10 hits in Germany, Switzerland and Netherlands.

Kate Winslet is the youngest actress that has received 2 Oscar nominations at the age of 22 and was the youngest actress that has 6 Oscar nominations at 33. She was most famous as “Rose” in the world-wide hit movie “Titanic”. She has received numerous acting awards, the recent of which were Best Actress Awards for the movies – “The Reader” and “Revolutionary Road”.

Please find below the music video of her song “What If”, produced by Chris Horton and directed by Paul Donnellon. Kate is shown here walking around an old Victorian house (she’s slimmer here). Some clips of the film were also included in this music video. You may also find the song’s lyrics here. 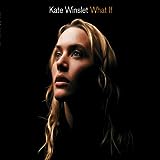 What If
Buy Now

Kate Winslet as a Singer

Do you think Kate should also spend time on a singing career?