Wreck-It Ralph has always been the bad guy, wrecking everything in his site.

When someone puts a quarter in his game, he begins to smash a building down while Fix-It Felix, Jr. goes behind him to fix everything that Wreck-It Ralph has destroyed.

Everyone in the game loves Fix-It Felix, Jr.

The characters throw a party to celebrate their 30 year anniversary.

Wreck-It Ralph finds out that they are having a party and that he is not invited.

When he sneaks into the party and destroys everything, the other characters tell him that he is not invited to the party and he never will be, but they would give him a room in the building if he ever won a medal.

The other characters know that bad guys never win medals, so they are sure that he will never be a tenant in the building, but Wreck-It Ralph is determined to get a medal and be part of the group.

Every night they have a party, support groups and hang out at Tapper's.

While at Tapper's, Wreck-It Ralph finds out that there is a medal he can win in the arcade game Hero's Duty.

All he has to do is get past the Cy-bug's, get to the top of the tower and find the medal.

Wreck-It Ralph Tries To Get A Medal In Hero's Duty

Before the Arcade shop opens, Wreck-It Ralph decides that he needs to do anything he can to get his hands on a medal.

He goes into the game Hero's Duty to retrieve the medal and bring it back to his game to show all the other characters there.

When a character goes into another arcade game, it is called 'Going Turbo'.

It's not allowed and is a huge No-No.

Sergeant Calhoun is trying to get her troops through all the evil Cybugs to get to the medal at the top of the tower.

The Cyburgs turn into anything they eat and they multiple like crazy!

Wreck-It Ralph doesn't listen to Sergeant Calhoun and takes off up the tower and gets the medal, but he also touches a whole bunch of Cyburg eggs that begin to hatch.

Wreck-It Ralph gets into a space pod to leave the game Hero's Duty with the medal and get away from the Cyburgs, but he had a Cyburg attached to him when he left the game.

It's a Sugar Rush!

Wreck-It Ralph crash lands in the Sugar Rush with the Cybug stuck to him.

The Cybug gets away from him and he just wants to get back to his game with the medal.

Sergeant Calhoun comes to the rescue in Sugar Rush to get rid of the Cybug.

If they are in other games, they could multiple and take over the game like a computer bug or virus.

In the meantime, Wreck-It Ralph is stuck in a tree when he meets Vanellope von Schweetz.

Venellope is a character in Sugar Rush and she has a glitch.

She wants Ralph's medal so the other characters will take her seriously.

Vanellope plans on using the medal as her token to get into the race.

If she wins the race, she hopes that the other characters in her game will accept her.

Vanellope gets the medal away from Wreck-It Ralph and submits it for a spot in the race.

When Wreck-It Ralph finds out, he is upset, but he tries to help Vanellope win the race so he can get his medal back.

He also relates to her because they are both trying to gain acceptance from the other characters in their games.

Meanwhile, the Cybug is still hiding in the Sugar Rush game.

Sergeant Calhoun is looking for the Cybug so she can get rid of it and save the day.

The little girl tells the arcade store owner who unplugs the game and puts an out-of-order sign on it.

If Wreck-It Ralph doesn't come back soon, the game will go to the dumpster.

He finds Ralph in Sugar Rush and also meets Sergeant Calhoun, who he instantly becomes smitten with.

Together, they have to help Vanellope win the race, get the medal back, find and get rid of the Cybug and get back to their games. 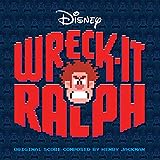 When Can I See You Again? (From "Wreck-It Ralph"/Soundtrack Version)
Buy Now

Will They Make It?

The leader in Sugar Rush is determined to make Vanellope lose the race. But why???

During the race, we find out that the Cybug has multiplied and now there are thousands of eggs ready to hatch.

The Cybugs begin to hatch and wreak havoc on the race and the whole video game.

One of the Cybugs eats the leader of Sugar Rush and turns into a mutant leader/Cybug.

That's when we find out why the leader doesn't want Vanellope to win the race.

He had gone turbo from another arcade game that has been obsolete for years.

He took out the memory of all the characters in Sugar Rush and became their leader.

But who was the leader before him?

In the end, they are able to get rid of the leader and the Cybugs.

Vanellope finds out and remembers that she is the princess leader of the game Sugar Rush and all of their memories come back.

She is now the rightful leader and she is no longer a glitch.

The characters in Fix-It Felix, Jr. realize that they need Wreck-It Ralph to make their game a hit.

They accept him into their group and invite him to parties.

Fix-It Felix, Jr. and Sergeant Calhoun end up getting married to each other and everyone lives happily ever after!!!

My children are 3 and 5 years old.

They loved this movie and so did my husband and I.

It was a great movie for the whole family.

My husband and I enjoyed seeing characters from video games we used to play when we were growing up.

I bought the Wreck It Ralph DVD the first week it came out and I love it!

The music in the movie was wonderful!

The Wreck It Ralph soundtrack would be fun to listen to!

Wreck It Ralph also has games online that you can buy.

They would be a great compliment to the movie!

Who was your favorite character in the movie Wreck-It Ralph?