Kids TV Shows Of The Past: Puff The Magic Dragon (Full Videos Included)

Puff The Magic Dragon was a song by the group Peter, Paul and Mary that was released back in 1963. It was written by Peter Yarrow and Leonard Lipton. Over the years the lyrics of the song have been interpreted to have connections to the 60s culture however the writers Leonard and Paul have aways denied this.

In the late 70s the song sporned an American TV movie that delt with a little boy who wouldn't talk. Puff creates a paper version of the boy in which he places the boys happiness. The two then proceed to create a boat out of the boys bed and other things they can find before heading off to Hannalee.

On the journey Jackie helps different characters and finds his confidence which is placed into the real Jackie when they get back. This gives Jackie Draper his voice back.

Puff the Magic Dragon in the Land of the Living Lies

In 1979 Puff takes a girl who always lies on an adventure to the land of the living lies.

Puff and the Incredible Mr. Nobody

The final film in the series came in 1982. This one concerned a young creative boy who beleived everything he did was not him but an imaginary friend. 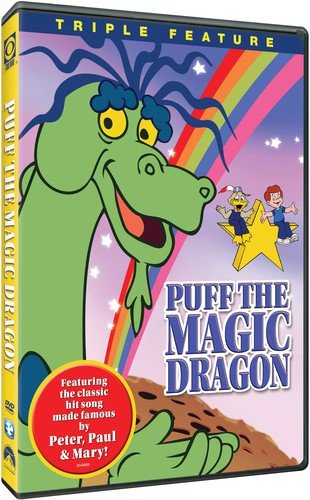 Where the shows Controversial?

Like the song the Shows themselves have and still suffer from those who believe there to be controversial drug references with in them. Just take a look in the comments section for each of the You Tube Videos.

My oppinion is that people see and hear what they want to see and hear whether its there or not. Yes at times they are a little sureal but most kids TV of that time was.