Lefties of the World Unite and Take Over

I never thought anything of my being left-handed all my life. I do know I'm a bit different, a bit disadvantaged because most stuff that deal with the use of both hands were designed with right-handed people in mind. I remember smudging over my writing because I'd run over it with my hand. The seats in school where a small slab of wood that serves as the table is attached to right side of the chair had me turning my torso towards the right and I had to reach over with my left arm to get to my writing stuff, which did give me some discomfort. Other than that I can't recall any other difficulty. My handedness, sometimes called laterality is limited to writing only I guess. I can play the guitar alright, some say that may be a difficult feat for me. I guess I even have an advantage in racket sports because I can handle a racket with both my left and right hand. I play ping pong, badminton and a little tennis and always my opponents would complain over not knowing where my shot will go. I can also serve a volleyball with both hands but my right hand is stronger.

So I never really gave it much thought, until I saw US President Barack Obama signing his first documents in the White House with his left hand. Then the commentator mentioned that five of the last 10 US presidents (Ford, Reagan, HW Bush, Clinton and Obama) were lefties. It got me thinking if there was really anything there. The first thing I learned is that 90 to 92% of all humans are right-side oriented. I am in a very exclusive group then, there are only 8 to 10% of us in the whole wide world. Then I started recalling left-handed people that I know and I'm stumped! Well there's my father (probably where I got this from), then there's my boss at work and a client visiting from overseas.

What I discovered next scared me a bit, a study suggests that some groups of individuals with neurological disorders (dyslexia, downs syndrome, epilepsy, schizophrenia, autism and mental retardation) are left handed, then it went on to say that there are some genetic factors in play as well in the business of laterality. The etymology of the word “left” is likewise not very encouraging. The word “right” not only is a synonym for correctness but also justice and authority. The word left comes from the Latin sinestra, which also evolved into the negative word sinister. In French left is gauche meaning awkward or clumsy.

So much for the negative drift, I said to myself. Let's look for the upside of being left-handed. It seems that in the U.S., left-handers have a day, August 13 is the National Left-Hander's day. I totally have no idea what goes on in the celebration of the lefties but I sure am curious to find out. Maybe if all left-handers actively take part in this event then we could, all 10% of us start plotting to rule all of you right-handed populations in the world. Let's see if some of the famous left handers who came before us are leader material. On the top of the list is Marilyn Monroe, followed by Angelina Jolie. Hmmm that sounds just about alright. Jim Henson the puppet man is also in the list then there's Robert De Niro. Tom Cruise is also left handed and he is a certified dyslexic. Now the list gets better, we have Leonardo da Vinci who was not only a famous painter but was a scientist, engineer, mathematician, inventor, painter, architect, sculptor, writer, anatomist and a musician. Michaelangelo and Pablo Picasso were also left-handed. In the field of music there is the Beattle's Ringo Starr and Paul McCartney, Jimi Hendrix and Curt Cobain (McCartney and Hendrix have performed using left handed guitars, customized for them). In entertainment, there's David Letterman and of course, Oprah Winfrey who is very proud of being left-handed and had several shows dedicated to left-handedness. In world leaders, there the Cuban strongman Fidel Castro. The American golden boy of boxing Oscar dela Hoya is a lefty, scientists have suggested that lefties may even have an advantage over right-handed competitors in sports as evidenced by the “Sultan of Swat” Babe Ruth of the NY Yankees, who pitches and bats with his left hand.

For better or worse I am glad I'm a lefty, if only because most people I know are right-handed and that sets me apart somehow. I may have experienced some discomfort growing up and living in this right-oriented world but hey if I can live half the life these famous lefties lived then I'm fine. 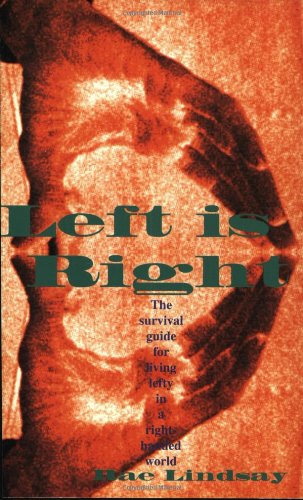 Left Is Right: The Survival Guide for Living Lefty in a Right-Handed World
Buy Now