Stephen Pastis was an attorney in San Francisco, California and it seems a lot of California attorneys leave the law behind to do something else. Erle Stanley Gardner developed the detective novel series starring Perry Mason and Donald Lamb/Bertha Cool, while Mr. Pastis went straight to the newspaper comics - by way of the Internet where he developed is law school doodles into more of a full blown strip.

His contribution to comic strip literature is Pearls Before Swine, debuting in December 2001 in Orlando FL in the Orlando Sentinel and DC in The Washington Post. By the end of 2001, the people of America needed a good laugh, having suffered through the atrocities of 9/11. This comic strip helped. By 2011, it was bringing new laughter every day to the extent that many people begin their day by reading the strip in more than 650 local newspapers. Personally, I must read two: Pearls Before Swine and Get Fuzzy. Put them together, and you have something that approaches Pogo of the mid-20th Century.

Coincidentally, Darby Conley, who does the strip Get Fuzzy, was involved with the artistic side of Pearls at its beginning.

Working as an insurance attorney was so much fun...

Pearls Before Swine has always raised controverial points for thought and discussion as well as side-spliting laughter, as did Pogo last century, along with Doonesbury, Sylvia, and several others. Sylvia by Nicole Hallander is considered too liberal for the Ohio market, but it's hilarious and available in Chicago. Pearls is more controversial in a way, but funny at the same time. If the number of death threats a comic strip author receives is any indication of success, then Stephan Pastis is probably Number One in America in 2011 (his 10th year anniversary of Pearls in newspapers).

Pearls Before Swine has been awarded...

How to Draw Rat and Pig

Sharp as a Razor that Makes You Laugh

Sharp parodies, plays on words, and social commentary usually take a measure of intelligence and quick wit. These qualities are apparent among talented authors such as M.J. Trow in his LeStrade Mysteries series, Martha Grimes in her Richard Jury/Melrose Plant mysteries, the staff of Mad Magazine ("the usual gang of idiots") founded by William Gaines, and a few others. Stephan Pastis is one of the best when it comes to these skills and Darby Conley's Bucky Katt and Satchel Pooch are right there as well.

If any of my HubNuggets roundup Hubs make you chuckle or give you a sense of deja vu, you can thank all of these people for their inspiration.

A particularly funny line is found beginning in the April 6, 2011 edition of Pearls Before Swine. You can look at the link for the fun, but here's the dialogue:

The word play will go on for days...

Laugh at the Archives

Who Are These People?

The primary characters of the strip are Rat, Pig, Goat, and Croc. Rat's arrogant, Pig is naïve, Goat seems level-headed, and Larry Croc is a silly goose with a changing accent. To me, it's Cajun. Guard Duck is an army professional and a few other characters appear intermittently, along with characters from other comic strips and from daily political news.

A favorite in Pearls is the cat Snuffles, a little ball of cute fur whose feet you cannot see until he pulls out a machine gun... 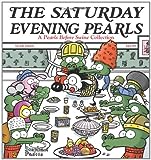 The Saturday Evening Pearls is one of the fantastically funny book collections off Pearls Before Swine. You'll note that the cover illustration is posed as a Norman Rockwell print of a tylical middle class family having Thanksgiving and expressikng thanks for country home, and, hearth. The characters of the strip are thankful for other things - Zebra for his home, but who can understand Larry Croc's mind? Oh yes, beer hats are to be thankful for.

Animated comics are now available online at the Pearls comic website listed above and some longer animations may be in the planning stages.

The Pearls fanchise also offers wall calanders, original strips signed by the cartoonist, logo accessories and apparel, and new-book announcements as they come to life. You can see a few favorites here, including Sgt. Piggy's Lonely Hearts Club Comic and Larry's Friendsheep.

If Caroline In the City was a successfful TV show about a cartoonist's life, perhaps Pearls Before Swine could become even better.

More on Cartoons and Cartooning