Library of Top Ten Songs From 1980 with Instant Videos

This year is 1980. Out with Jimmy Carter, In With Ronald Reagan as President. Cost of gas, $1.19 per gallon. Ground beef cost $1.39 per pound. Magnavox Home Movie Camera, $1599.00. Average income, $19,500 yearly. Release of the arcade game, PAC MAN, United States leads boycott of Olympics against Russia. Mt St Helens erupts. The post in note is invented and introduced..

The Top Ten List is brought to you through a collection and review of a wide range of sources including Billboard charts, popular polls, and historic hindsights. We hope you enjoy this list and welcome any comment or suggestions.

Call Me was sung by the American New Wave Band, Blondie. It became the theme song for the movie, American Gigolo. It was a number one hit for six weeks in a row on the Billboard Hot 100 charts. It became Blondie’s biggest single hit ever and their second number one spot on the charts. In the United Kingdom and in Canada, Call Me hit number one on their charts and it was also their fourth and second top of the charts placers By the end of the year, it became Billboard's top number one hit.

It's Still Rock & Roll to Me

It's Still Rock and Roll to Me was performed by Billy Joel and is from the album, Glass Houses. The song made it to the number one position on the Billboard Hot 100 charts for two weeks in a row. It’s Still Rock and Roll to Me was on the top of the Billboard Hot charts for 11 weeks before peaking at number one. The song has special significance to musicians and entertainers everywhere expressing the challenge and how fame impacts artist. The single alone reached the platinum level from the RIAA for achieving sales of over one million copies in the United States alone.

Emotional Rescue was sung by the English rock band, The Rolling Stones and was written by Keith Richards and Mick Jagger. It is the feature song on the album by the same name. Emotional Rescue is a strongly disco influenced work sort of like the band's piece, Miss You.

It is rumored that Mick Jagger and Keith Richards were on the outs not just over this song but with the way the band was going. Jagger seemingly wanted to take the band in more of a disco direction. Keith, did not.

Little Jeannie was written by Elton John and Gary Osborne and recorded and performed by Elton.

It reached number three on the Billboard Pop Chart in the United States, his biggest hit since 1976. On the Adult Contemporary Chart, Elton John hit number one and was certified gold by the RIAA. On both the Billboard and Cash Box it peaked at number 3.

Even though Little Jeannie did so well, Elton John rarely sang it live except on his 1980 and One Night Only concerts

In an interview, Bob Seger said that the inspiration for Against the Wind came from the time spent on his high school cross country team.

Let My Love Open The Door

Let My Love Open the Door is written, performed, and recorded by Pete Townshend. The song can be found on his 1980 album, Empty Glass. In the United States, Let My Love Open the Door, traveled up the charts reaching number nine on the top ten charts. In Canada, it climbed the charts to reach number five. On the British charts, it made the top one hundred at number forty-six.

Let My Love Open the Door was Pete Townshend only solo top ten hit on the Billboard’s Hot 100.

Ashes to Ashes was both written and recorded by David Bowie. Originally, it was found on the 1980 album, Scary Monsters (And Super Creeps) from where the lead single came from. Ashes to Ashes became David Bowie's second United Kingdom number one single. The video produced from it, was, for the time period, purported as the most expensive music video ever made.

Ashes to Ashes original song title was called, “People Are Turning to Gold” David Bowie’s lyrics are reminiscent of the 1969 “Space Oddity” including parts of the original which are referenced.

You Shook Me All Night Long

You Shook Me All Night Long, from the album Back in Black by AC/DC was their first single that featured Brian Johnson as the lead singer.

"AC/DC" is an abbreviation and means, "alternating current/direct current" electricity which is where the name of the band came from.

Whip It was written by Mark Mothersbaugh and Gerald Casale of the American New Wave Band, Devo and the second single of the band’s third studio album, Freedom of Choice in 1980. Whip It was Devo’s biggest and most memorable hitting the number fourteen spot on the Billboards Hot 100 chart and then number eleven on the Canadian Singles Chart. On the Australian Singles Chart, it reached number seventy-seven.

Another One Bites The Dust

Another One Bites the Dust hit fame and acclaim worldwide. It hit number one on the United States Billboard Hot 100 and spent fifteen weeks there. On all of the main charts, it spent a total of thirty-one weeks, including the Disco Top 100, and the Hot Soul Singles charts.

Another One Bites the Dust won an American Music Award and received a Grammy nomination for the Best Rock Performance by a Duo or Group with Vocal.

Which artist/band do you think is number one? 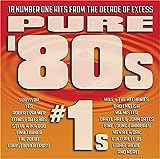 Glad you could stop by and enjoy a musical taste of the past. Please feel free to leave comments below or suggestions of other years you would like to see. Although we cant's cover all of the information about each band and each song, we would be glad to add whatever you would like more information on.

Thanks for stopping by--Keep on Rockin!