"The Hunger Games": Youth Crises and a Mockingjay as Hope

We Are All Katniss At the Circus

Adults reading the trilogy of Hunger Games - Catching Fire - Mockingjay are pointing out that the starvation we see in the 12 Districts surrounding the North American Capital of the nation Panem is like the hunger attempting to encompass the peoples of the world today. Resources are growing short and the people are dying of starvation (or lack of jobs), behaving badly in the real and manufactured shortages we experience. Reality shows, illicit drugs, movies and other things distract attention from the problem.

Panem comes from the Latin phrase for "Bread and Circuses" (panem et circenses), hearkening to Rome as starvation was staved off by providing the people food and entertainment only on alternating days after a political ploy of throwing cheap bread to the crowds in daily Coliseum events became too costly - the Romans had made too many holidays and Colosseum events; and then they were conquered by the Visigoths.

The big yearly entertainment in the world around Panem is the murdering reality show called The Hunger Games, in which 24 teens and preteens fight one another to the death. Sponsors send food, weapons, and tools to the youth that are most likable or sympathetic. The sole winner lives with his or her life and a pile of riches that will save the family from literal starvation. But there is always next year and you might have to fight again.

The film of this popular Young Adult (YA) novel will stick with America's youth as well as many adult readers for some time. It is pertinent to our times in the 2010s and I am seeing each film in the series as it debuts. I felt like Katniss a few decades ago in high school, so what must our young people be feeling now?

While we often wait for the imagined things in science fiction to become reality, the realities of the government, societies, and Districts of Panem are already real in varying degrees in the United States.

Youth are fighting for their lives at home, on the streets, and in classrooms.

This fight has been going on since post-World War II years became filled with the Cold War. In the 1950s, West Side Story portrayed one view of street gangs and violence. Violence is worse in many American towns now and bullying is killing some of our children and youth, while starvation kills some of the rest.

I am not so far removed from Panem's exploited 12- to 18-year-olds that I do not remember.

After leaving a secondary school system of hatred and exploitation by adults who did a preemptive strike and punished us for what our older siblings and cousins did against the Viet Nam Conflict (before we had a chance to do it, they said), I suffered nightmares of being caught and returned to that Hell. I suffered them until I was 30.

What nightmares must Katniss and her young sister Prim have? -- On the movie soundtrack, Taylor Swift's Eyes Open is a song that puts Swift right at the middle of her own Hunger Games, trying to maintain sanity and productivity as the world watches for her to stumble and decline. That instance is a good application of the concept of the games, because life is warfare in the 21st century. Youth attempt to survive school, technology, politics, work, families and more.

Run Or Be Killed

The images of Katniss running forever through the film with both peer killers and reality show sponsors breathing down her neck in a future decade reflect life today. Among peer pressure, bullying, discrimination and competition for good schools and jobs, life is an inordinate war.

The larger Enemy is the adults - the rich and the parents watching the show - and the sponsors. The story is so painfully effective, because Katniss runs through a shattered adolescence of starvation, emotional assaults and tricks, attempted murder, peer pressure, sponsor influence, cliques, and exploitation. Being from the poorest district, she should be ill-prepared and lose, but she determines to win.She does win, with wit and strategy in good alliances.

Many of us have lived a similar adolescence in a different storyline and can relate to Katniss, but not all have reached the blessings of resolution and closure. The experience of the film and the importance of the soundtrack will provide those blessings for many adults and will give our teenagers hope.

Paradox Of the Hunger Games 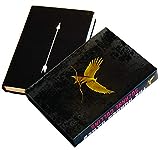 The Hunger Games - Collector's Edition
This trilogy is written for teens and young adults, but can uniform those over 18 about the tribulation through which teenagers and preteens are living in the 21st century. I find the revelations very close to those experienced by patients I have seen in practice, our military forces (especially the youngest of them), and by targets of bullies. Any teenager today has a tough path to navigate.
Buy Now

Flaming Arrows and Fire as Symbol

No religion is mentioned in The Hunger Games; people survive by their own determination to win a living against the idle rich and the upper class's manipulation from the Capitol.

One symbol seen in the film and on promotional materials is fire - a fire of destruction and anger. Flaming arrows - or non-flaming - are old weapons that still work for the youth forced to fight one another in these stories.

The bow that seems a part of Katniss represents both a set of tools for capturing food game and a means for self defense. She is both the hunter and the hunted. The bow reflects survival on two sides of the same coin and the coin is constantly rolling in this game.

We all must be equipped for life in both respects, as is Katniss - work (food capture) and self defense against an unhappy world. Are we equipping the next generation, or do adults even know how to do so?

As a youth, I had archery equipment made by the Cherokee Nation. When it was destroyed, I later studied martial arts and while the three-dimensional weapons of those arts are handy, the larger skills I've learned cannot be destroyed while I am living. That is the bow that stays with the owner and facilitates both livelihood and defense, as needed.

Running with a bow is symbolic of Katniss. She runs, falls, rolls, rolls, jumps up, and runs again - for her life and her family's. Forrest Gump the movie produced the chant Run, Forrest, Run! When the movie audience chants Run, Katniss, Run! they mean something different and more vital.

Unfortunately, Katniss learns that when you win a hard fight to gain success, there are more powerful - vengeful - foes yet to face.

The Hunger Games: Songs from District 12 and Beyond

Not all of these numbers on actually in The Hunger Games film, but many of them speak to the entire trilogy and the application of the concepts of the whole as reflected in our own world.