One Of The Most Recognizable Voices In Music

A Little History And Some Little Known Facts

Most anyone that is a true fan of Willie Nelson will know the basics from his biography... he was born April 30,1933 in Abbott, Texas. He grew up along with his sister, Bobbie, raised by their Grandparents who first gave them music lessons, and introduced them to music. I've always thought that Willie Nelson has always been exceptionally creative, and a fantastic artist... he is most certainly a free spirit with a very unique and intriguing sound.

There are things about Willie that I didn't know, however, and I found some of these little known facts from his life to be fascinating! You might know the standard biographical facts, but hopefully I'll be able to share some lesser known things, and that you'll find them just as interesting as I have.

Willie became a member of the Grand Ole Opry in 1965, and eventually grew disillusioned with the direction Country Music was headed. He ended up "retiring" in 1972, and then moved to Austin Texas. The only thing that got him back into music was the evolving of the "Hippie" movement, which gave rise to "Hippie music."

In 1973, Willie signed with the label Atlantic Records, and he began to record and perform as a part of the new "Outlaw Country" movement. In the mid 1980s, he became a member of the most famous of the Outlaw groups, which was known as "The Highwaymen" and also featured members Johnny Cash, Waylon Jennings, and Kris Kristofferson.

Probably one of the most famous events from the life of Willie Nelson was a little run in he had in 1990 with the IRS. It seemed that his accountants, Price Waterhouse, hadn't paid his taxes for years, leading to Willie owing the IRS thirty-two million dollars in back taxes. Willie released an album in the early 1990s in an effort to come up with funds to pay those taxes, and the album was called - in a tongue in cheek way - "The IRS Tapes: Who'll Buy My Memories?" The profits from sales of this double album along with auctioning off a lot of Willie's belongings allowed him to have his taxes paid in full by 1993.

One belonging that Willie did NOT want to have auctioned off to pay those back taxes was his famous guitar, which he nicknamed "Trigger." A Martin N-20 nylon string acoustic guitar, it has a hole in it from Willie's use of guitar picks (there was no pick guard on it, since classical acoustic guitars were meant to be used with fingers and not picks). He wore that hole into that guitar over a lot of years of playing it. Willie once said that if he were to play a different guitar, his music wouldn't sound the same. When he uses this guitar, which has "the best tone" he has ever heard, every song sounds like a Willie Nelson original and listeners can tell that it is a Willie Nelson song. This guitar has over 100 signatures on it from famous musicians, lawyers, and a few football coaches. He was quoted as saying if they were to take his guitar - "I quit."

In the 1990s and into the 2000s, he has continued to release albums about every year, as well as touring extensively. He lives on the Island of Maui now with his wife, Annie and two sons.

He has been very generous with his time, when he believes in a cause...

Willie has been exceptionally charitable with his time, and seems to have a soft spot in his heart for those less fortunate, especially those who have been victims of natural disasters throughout the world. Here are a few of the organizations that have benefited from Willie Nelson's philanthropy:

Willie Nelson is a strong believer in finding alternative fuel to run trucks, buses and other vehicles. In 2004, he along with his wife, Annie, formed a partnership with another couple to build two bio-diesel plants. One of the plants is located in Carl's Corner, Texas, and the other is located in Salem, Oregon.

Known as Willie Nelson Bio-Diesel, these plants market bio diesel fuel to truck stops. Being a man that stands up for what he believes in, his own tour bus, known as "Honeysuckle Rose" is run on Willie Bio Diesel fuel. Willie and family tour all over North America in this bio-diesel bus, using fuel made from vegetable oil.

A New Album, "Heroes" Coming Out In May

Willie Nelson has a new album coming out on May 15, 2012, that features some interesting new songs, as well as revisiting some country classics. It should be a very interesting album, and the list of guests on the album is pretty creative and varied as well! The album features guest spots by Snoop Dogg, Sheryl Crow, Kris Kristofferson, Merle Haggard, Billy Joe Shaver, Jamey Johnson, and two of Willie's sons, Lukas and Micah Nelson.

Performing with his famous guitar, Trigger, Willie lends his creative take to some older songs, plus features some new songs with very interesting titles! One of those new creations is called "Roll Me Up And Smoke Me When I Die" and features the talents of Jamey Johnson (who wrote the song "Give It Away" for George Strait), and Kris Kristofferson, and Snoop Dogg.

Another song with a fascinating title is "Come On Back Jesus" and this song features Willie's sons Lukas and Micah. Three songs on the album were penned by Willie's son, Lukas, and he performs on several tracks with his Dad.

This should be another impressive and interesting album to add to anyone's collection of Willie Nelson albums (I'm dating myself with that word, album, maybe I should say "CD's" instead). But to me, a true collection of musical artistic expression is better represented by the word "album."

Willie Nelson has been and will continue to be a musical icon, not just in country music, but in all music. He is truly one of the most unique artists I've heard in my lifetime. They just don't make 'em like Willie any more! 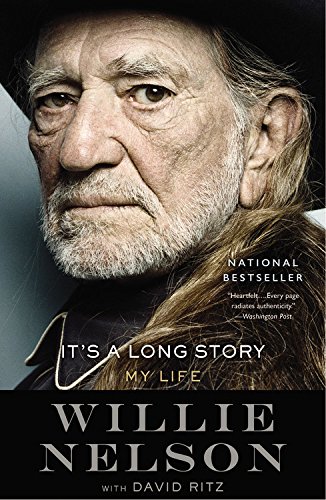 It's a Long Story: My Life
Buy Now