Love Him Or Hate Him, John Cusack Is Edgar Allan Poe - The Raven 2012

Some of the major film critics in the newspapers criticized both the film and actor John Cusack in 2012's The Raven, because he is not Nicholas Cage.

These voices says that Cage should have been cast as Poe, but I think that casting would have taken the film over the top and over camp into near-comedy. Ghost Rider was a very entertaining and visually stimulating film, but its sequel was much less so. The superhero from hell character, though, was on the edge of comedy inn both - a little like Cage's mad ambulance driver in Bringing Out the Dead. Still, Cage might be cast as Poe in some other sort of storyline and we;ll see what we get. Could be interesting.

As it was in The Raven (2012), we received an entertaining movie a little like TV's Castle, wherein a writer works closely with a police detective. I think it makes an interesting film from a new angle in Poe's life and death and gives the public something to appreciate in the absence of the Poe Toaster. That individual no longer secretly visits Poe's grave to leave a rose and a partial bottle of alcoholic beverage.

Whether the person or his descendants that carried out this tribute for decades died, lost interest, or were put off by the hordes of people waiting to catch a glimpse of him, we do not know. The crowds of vigilant onlookers waiting for him certainly took the fun out of the tribute. They also robbed the public of the Poe Toaster story every year. The Raven of 2012 provided an alternative entertainment, especially since it was released in April when the Mystery Writers of America's Edgar Awards were announced. Long time mystery writer Martha Grimes was given the Grandmaster award in 2012 and the other winners can be seen at The Edgar Awards. A stage play with Holmes and Watson is one of the winners, bring delight to fans of that duo.

A Different Manner of Portrayal

John Cusack portrays Edgar Allan Poe in a way we don't usually imagine, despite hearing all our lives that the author was an alcoholic and expelled from West Point.

We see Cusack's Poe craving alcohol, screaming at people in bars and being tossed out, shouting at his newspaper editor, and bellowing about a worn out hack critic's work being used in place of his own. Poe is not appreciated in his own lifetime as he might have been. In fact, his innovative style may have earned him a rating of "crackpot." Viewing the film, one might even say, "No wonder he drinks."

I think Cusack portrayed Poe more on the mark of the real man than anyone else to date.

The plot of 2012's The Raven circles through the work of a serial killer whose identity we do not expect in the end. The murderer uses Poe's own short stories to set up the tableaux for his killings and then he taunts the writer about the stories and the current victims of them.

Letters and notes reach Poe, as if from Jack the Ripper. At some point I thought, how compulsively driven the murderer seemed and then I had an inkling of his identity.

Each murder is staged well and that based on The Pit and the Pendulum will have many viewers fearing pendulums and sharp objects for many years afterwards. This one features a lot of blood and we are treated to seeing the entire murder and the gory corpse afterwards. Who is the dead person? - Someone Poe probably wanted to murder.

Poe wrote during the Romantic Period of literature and poetry and became one of the most famous Dark Romanticists. Since that time, medicine and health science have noted that many writers of this sort have immense talent coupled with depression and alcoholism/substance abuse and further, that writing therapy helps some patients that suffer depression and/or substance abuse. Out of despair and alcohol came the solid foundation of the short story as a recognized genre, along with detective fiction, all from the mind of Edgar Allan Poe. Horror and science fiction were interwoven among his work.

In the recent film, Poe talks about his wife's death from consumption (tuberculosis) as an agonizing ongoing maelstrom and how it took everything out of his heart. Then he is thankful that he met Emily (fictional) and gained hope for a future. Emily becomes an intended victim of the serial killer that is taunting Poe. Poe's life is consumed with seeking the killer in order to stop this crazed "fan" from using his stories for staging murders. The killer wants to take on Poe's life himself, feeling unappreciated in his own work; he wants to kill Poe as well and we see this syndrome among stalkers today. It resignations with viewers that have been plagued by a stalker themselves.

The account of Poe's actual death is sketchy He was found apparently stumbling through the streets of Baltimore, babbling incomprehensibly. Some historians think he had been drinking at The Horse You Came In On pub. Edgar may have been poisoned. This might have been alcohol poisoning itself, wood alcohol poisoning, or absinthe intoxication. The recollections of drinkers that absinthe causes hallucinations are reportedly exaggerated, however.

Poe may have been heavily intoxicated altogether, or poisoned by wood alcohol, or both drunken and feverish. Diseases of the time in industrialized cities included two that produced delirium: typhoid fever and typhus. In 1849, bacteria as such had not yet been discovered; that came near the end of the American Civil War in Louis Pasteur's discoveries in France. Edgar may also have suffered a head injury, which might result in incoherent speech. Unfortunately, the most serious STDs can result in dementia.

The most interesting theory, since Edgar was found wearing someone else's clothing, is that he was a victim of forced voting in a local election. It was a political practice for groups to beat a citizen several times, each time dressing him in different clothing, and forcing him into a polling place to vote for a particular candidate.

Bricked Up In a Wall

Poe wrote this story in retaliation for a stabbing parody of Poe's life published by Thomas Dunn English.

There is plenty of bloody excitement and gore in this film, without going over the top. The pendulum murder is quite grisly and we see a body that has been bricked up in a wall in the sewers below Baltimore. Ravens and coffins appear intermittently as well. A grand ball scene representing the Masque of the Red Death is interesting, but I would have liked to have seen the differently colored rooms within the party, as illustrated in the story. What makes up for that lack is a comic scene in which Poe grabs drinks from passing trays; chugging one in particular, he flings the empty glass backwards into another room cordoned off with heavy draperies. Poe's constant imaginative name calling is also a treat.

John Cusack as Poe works well with Luke Evans as Detective Fields, and this is where the plot is similar to Castle, the writer and detective working together. In real life, we'd say that that would never happen - but it did. It happened with Truman Capote and Harper Lee worked with detectives in preparing the manuscript of In Cold Blood. One difference is that Fields asks Poe to help him, as does Lestrade of Sherlock Holmes in the BBC series Sherlock of the 2010s.

See The Raven (2012). It is quite different from the Karloff-Lugosi horror film of 1935 and the Karloff-Price-Lorre Raven comedy of 1963 and several other remakes.

The next historical fiction film I want to see is Abraham Lincoln, Vampire Hunter. It did not happen, but it is fun to think that it might have done so. I like the way the President twirls an axe before he uses it...

Ironically, Nicholas Cage tried for this role, but Benjamin Walker won the part. 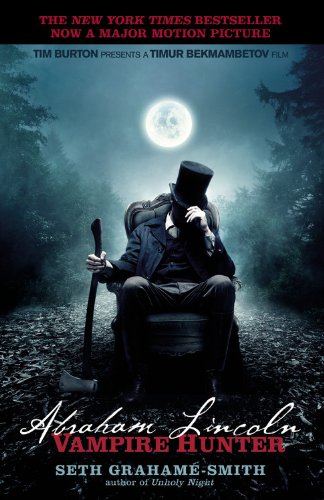