The Phantom Sequel Gets a Makeover

After being open less than nine months, Love Never Dies, the stage sequel to the hit musical The Phantom of the Opera, has been given a revamp. The production opened in London's West End in March 2010 to mixed reviews and a barrage of complaints from die-hard "Phans" of the original show. Criticisms ranged from the banality of Glenn Slater's lyrics to the improbable plot turns and character twists of Ben Elton's story and book.

To rescue the show, impresario and composer Andrew Lloyd Webber shut down performances for three weeks in November so the cast could rehearse a new version, with major changes that have converted at least one critic.

Love Never Dies: What Did They Change?

The opening of the show is the first major alteration. The first version, which you can hear on the

original cast recording, opened in a fairly subdued manner with Madame Giry lamenting what had become of the Phantom's Coney Island paradise, Phantasma. Now it opens with the the Phantom's song Till I Hear You Sing -- the big showstopper that originally occurred well into the play.

There are changes to lyrics scattered throughout the show, which is hardly surprising, since some of the original lyrics were embarrassingly trite. Word has it there's a lot more touching in the Phantom and Christine's big duet, Beneath a Moonless Sky.

There's also been a major character name change. The Phantom was going by the pseudonym "Mr Y," but this has been altered to "Mr H" in the revamped version. The thinking behind the change is that Christine assumed she was being invited to New York by the impresario Oscar Hammerstein (not to be confused with his grandson Oscar Hammerstein, of Rodgers and Hammerstein fame).

(Stop reading now if you don't want to know the ending.) The most important and most talked-about change is at the end of the show. The original ending had Christine dying in Meg's arms after Meg, in the midst of a mental breakdown after kidnapping Gustave, accidentally shot her. Raoul had already fled New York for Paris.

In the new version, the Phantom cradles Christine's body. Raoul returns and sits with the dying Christine while Gustave embraces his real father, the Phantom. No longer is the Phantom unmasked (though I believe he is at an earlier point in the show).

What hasn't changed is the basic storyline. And this is what most Phans were upset about. In Ben Elton's plot, it transpires the Phantom and Christine shared a night of romantic passion before he escaped to New York. Ten years later, Christine is still married to Raoul, and they have a 10-year old son, Gustave, who turns out to be fathered by the Phantom. Raoul is a bitter and washed-up alcoholic, and Christine eventually chooses to leave him to be with the Phantom.

The revelation of Christine and the Phantom's relationship and Raoul's sudden descent into drunkenness were viewed by Phans, such as the founders of Love Should Die, as a betrayal of both the Gaston Leroux novel and Lloyd Webber's original show.

I've not seen the show, but I admit I loved the album. Not for the lyrics, which ranged from adequate to bad, but for Lloyd Webber's music. He still has what it takes to write a hit musical. By all accounts the score is intact, and while Love Never Dies will never reach the heights of The Phantom of the Opera, I think the music will save the show for a few years yet. 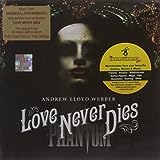