I heard the story many years ago of a beautiful young woman who, upon completion of the wedding ceremony was presented by her new husband with a handwritten list of “requirements” of his new wife. She opened the list and read it in stunned silence. It was apparent he had not taken a “wife” he had taken a live-in slave.
In those days divorce was unheard of, so she proudly held her head high and delved into her new life as her husband’s chattel, determined with God’s help to be the best wife she could possibly be. But she often failed miserably at her assigned tasks bringing his furious ire and frequent beatings.

For ten years she worked hard in servitude to this man, then suddenly he died leaving her penniless. As she stood looking down at his face in the coffin, she vowed in her heart never to become any man’s wife again.

She was so relieved to be free that she didn’t mind her poor means. In fact, she had become so good at cleaning the house, cooking, plowing and hoeing that it wasn’t long until she found work in a man’s house where the mother had died leaving him with the raising of two adolescent girls. He was so grateful for her help and praised her often for the work she was doing.

Not accustomed to anyone praised her she found herself falling in love with him, and to her surprise soon found herself at the wedding altar once again, her vow not to get married again forgotten along with the mean, domineering man of her past. Love had won; the old became new.
Many years passed and their love continued to grow and flourish along with their family.

Then, one day while going through an old chest she had brought with her when they married, she happened upon the list her first husband had given her. She read the list in amazement as she was still doing almost all the things on the list in her current marriage. Not once had her husband asked her to do any of those things.
The difference was love. She did them in response to his love and that of their children. Love never fails. 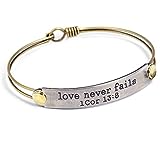