Maria João Pires was born in Lisbon, 23 July 1944 and is a portuguese pianist.

Very soon she learned to play piano: for five years gave his first recital at seven and played in public concerts Mozart. With only nine years received the award for Youth Musical Portuguesa. Between 1953 and 1960 studying with Professor Campos Coelho at the Lisbon Conservatory. Pursuing musical studies in Germany, first in Musikakademie with Rösler Schmid in Munich and then in Hannover with Karl Engel.

Maria João Pires become internationally recognized for winning the international tender for the Beethoven bicentenary in 1970, held in Brussels.

Did in his career where he played numerous tours works of Bach, Beethoven, Schumann, Schubert, Mozart, Brahms, Chopin and many other composers of classical and romantic periods. Maria João Pires is invited regularly by major orchestras worldwide to play the best concert halls, presenting regularly in Europe, Canada, Japan, Israel and the United States.

Business has developed both individually (recitals, concerts, recordings) and in chamber music: record of many successes, there are the recordings "Moonlight," with Beethoven Sonatas, "Le Voyage Magnifique," full of the Schubert Impromptus ; night and other works of Chopin, [1]. Sonatas of Grieg and the trios of Mozart with Augustin Dumay (violin) and Jiang Wang (cello).

Maria João Pires is the founder and leader of the Belgian Center for the Study of the Arts, in the municipality of Castelo Branco, kind of educational, cultural and social.

In 2006 the pianist moved to Brazil and declared to a portuguese radio "Antena 2" that she have suffered a lot in Portugal because of its project, the Belgian Center for the Study of the Arts. In Brazil bought a house on the outskirts of city of Salvador, capital of Bahia. state.

If you like this hub, read this one too: Wolfgang Amadeus Mozart - Talent and Genius 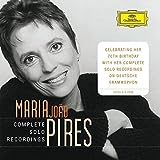