There is little denying it: Marvel rules the world right now. In movies, Marvel exists as its own cinematic universe interconnected between multiple films. That success has been parlayed into two network TV spin-offs, Agents of SHIELD and Agent Carter. Now, for its latest creation, Marvel has created its first live action series based on one of its superheroes - Daredevil. And with this series, Marvel has shown once again, they are here to stay.

The story of the show is relatively faithful to the story of the comics. In a childhood accident, Matt Murdoch was blinded by chemicals that heightened his remaining senses. He could hear better, smell better, and feel better than ever before. Growing up in the crime-ridden Hell's Kitchen, Matt used his heightened senses to train in the art of ninja after his father, a pro boxer, is murdered in a mob hit. However, Murdoch does not just fight for justice as a vigilante. By day, Murdoch is a professional attorney who operates a law firm with his college friend Franklin "Foggy" Nelson. In both his night and day jobs, Murdoch has to combat Wilson Fisk - AKA Kingpin - the most powerful crime boss in Hell's Kitchen.

Right from the beginning, it is easy to see why Daredevil makes sense as a live action series adaption. Although the idea of a blind man who learns to be a ninja is hardly the most realistic thing, but compared to characters such as Thor or The Incredible Hulk, Daredevil seems a little more plausible, at least not requiring too many special effects. Also being a completely new entity from the 2003 movie which left a sour taste in the mouths of many fans, the show does not have to cast expensive actors such as Robert Downey Jr. or Scarlett Johannsson. Though it does bring in some recognizable names and good actors. Special effects or not, Daredevil is a top notch production.

In many ways, Marvel has redefined itself as its own genre. Fans have come to expect fantastical heroes, big action set pieces and characters with a sense of humor. Daredevil has an identity of its own. While obviously being a superhero show, Daredevil mixes in elements of crime drama, legal drama, and even a touch of film noir. The show has a very dark and gritty tone. The TV-MA warning is certainly warranted. The creators do not shy away from violence - with some downright brutal fight scenes. Never does it feel like the show writers are being gritty for the sake of being gritty. Everything feels as though it is in line with the series. Like most Marvel productions, there is humor to be found. Do not expect laugh a minute comedy, but the cast - particularly Foggy Nelson - do chime in some funny one-liners.

As a hero, Daredevil is one of the more exciting heroes. Much like Batman, Daredevil does not have superpowers in the conventional sense. True, he has heightened senses, but that is at the cost of being able to see. (There is even dialogue on the show where Murdoch and Nelson debate whether he is still qualified as blind with his abilities.) There is certain fun watching him use his abilities. He is able to use his extra sensitive hearing to determine exactly where someone is, and his ability to detect heartbeat helps him work as a human lie detector - a definite benefit in his legal career. With his combat skills, Daredevil puts out some pretty impressive fight skills.

However, there is more to Daredevil - the show and character - than excellent fight scenes. Matt Murdoch is a man of many conflicts. Matt Murdoch has to wrestle with his dual personality - balancing his vigilante justice with his legal justice, or balancing pummeling criminals to a pulp with his Catholic upbringing. As a hero with no supernatural powers, Murdoch not only beats people up, he receives his share of beatings too. The viewer has a chance to see the vulnerable side of a hero who carries his battle scars with him.

Naturally, the first season is spent on Daredevil's origin. The style could best be described as a mix between Tim Burton's Batman and Christopher Nolan's Batman Begins - and I mean that in a good way. It is similar to the Burton Batman film because Daredevil is already active from the beginning of the series. However, he has not put the pieces of his identity together. The trademark red suit does not appear until the last episode of the season. Nor does he become known as Daredevil until that episode. Throughout the first season, the hero wears a makeshift black suit and goes by the nickname The Devil of Hell's Kitchen. This is a unique approach because it gives the viewer the chance to see how the eponymous hero pieces his identity together. Much of the origin is told through flashback. Considering the origin would have taken two to three episodes if the show were in chronological order, telling the origin through flashbacks was probably for the best.

Anytime a superhero is adapted into any adaption, there is always the question of how their villains will be incorporated - which villains? What will they look like? Who will play them? Only one of Daredevil's main villains appears in the first season. Now, as good as the Marvel Universe films have been, the villains have not been the best. There have been some good villains - Loki comes to mind. The Winter Soldier was pretty cool. Ian McKellan's Magneto has been around since 2000, and Kevin Bacon was delightfully evil in First Class. But the villains have been less memorable than the heroes. With Vincent D'Onofrio's Kingpin (Wilson Fisk), Marvel has finally found their top villain.

Aside from looking like he jumped straight out of the comics, Supporting characters build a lot of suspense for the character, but when Kingpin is on camera, he lives up to the hype. Kingpin is everything a good villain should be. Although he has henchmen put the hurt on people, Wilson Fisk has no shame in doing his own dirty work, viciously beating or killing those who stand in his way. D'Onofrio plays the part with such presence that he has menace and danger in the most subtle of actions.

However, much like the hero, Kingpin is not just a one note character. In spite of all this menace, Fisk shows a few other faces to his personality. In trying to convince citizens of Hell's Kitchen that Daredevil is the real threat, Kingpin shows that he knows how to wrap the city around his finger. He also develops a relationship with an curator named Vanessa, showing a more human side behind the diabolical Kingpin. It will be fun to see how the rest of Daredevil's rogues gallery will make it onto the series. However, they will have some big shoes to fill with Kingpin.

With so much to like about Daredevil, does the series have any faults? Well, as exciting as the action scenes are, some scenes are shot so darkly that it is a little hard to see. The show has a really neat visual style with plenty of black mixed with other colors. However, when the title character wears all black, he sometimes disappears in the background. With Daredevil wearing his trademark red suit moving forward, this issue should be easily remedied. On that note, there are some episodes where Daredevil does not get a ton of screen time, sometimes feeling like a supporting character on his own show. Then again, with such a good supporting cast - especially Kingping - that is kind of a nitpick. Also, some of the acting does kind of venture into hammy territory.With a show this good, there's some stretching to find faults. 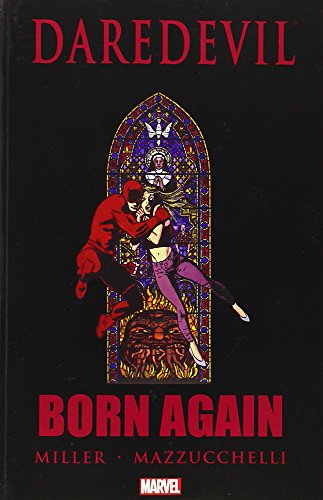