The CAGED System For Beginners - How To Master The Guitar Fretboard

The Worst Thing About Guitar Tuition For Beginners...

What's the worst thing about the way guitar is taught to beginners? The fact that you can get stuck on the first few chords you learn. There doesn't seem to be any bridge between being a beginner and beginning to master the instrument. People get stuck down at the bottom of the neck, strumming or picking at the few chord shapes they know.

But what happens when you move one of those chord shapes?

Well, then you've got another chord altogether. And that's what the CAGED system is all about.

The CAGED system just takes the handful of major chords you learnt as a beginner - C,A,G,E, and D - and moves them up and down the neck of the guitar.

For example, think of your C shape not as the one and only C chord, but as the chord that takes its name from the note on the B string and A string, wherever it's played. Move it up two frets, barre it at the second fret, and your C major chord is now a D major.

The A chord shape you've been taught takes its name from its root note on the G string. Now make an A chord shape, move it up three frets and barre it with your index finger at the 3rd fret, and you've got...C.

The G chord shape takes its name from the note on the two E strings. Make a G chord shape. Move it up the neck five frets, and barre it at the fifth fret. What have you got? C.

The E chord shape takes its name from the notes on the E strings and the D string. Make an E chord shape. Move it eight frets up the neck and barre it at the eighth fret. Guess what? C.

And the D chord shape takes its name from the note on the B string. Make a D chord shape. Move it ten frets up the neck and barre it at the tenth fret. Yep. C. And then you're back to the first chord shape again.

And that's all the CAGED system is. A way of using the whole of the guitar neck without getting lost, using simple chord shapes to impose some order.

How To Build A Chord

Every major chord is made of three notes: the root, that gives it its name - such as C, for example - and a third and a fifth from the major scale of that root note. Which in the case of C, would be C E G.

Every place on the neck that you can play a C, an E and a G together is a C chord. And that works for every chord in every key. When you know the formula for creating a chord, and you know the scale you're taking it from, you can build any chord you like anywhere on the neck. Which is a lot better than sticking with the handful of chord shapes every beginner learns.

Know Your Alphabet? Then This Will Be Easy

Time to learn the notes all the way up the neck. Worried? Don't be. If you learned the alphabet you can learn the notes on the guitar neck. There aren't half as many letters, for a start. Just A through G. Remember there are just twelve notes: A - A ♯/B♭ - B - C - C♯/D♭ - D - D♯/E♭ - E - F - F♯/G♭ - G - G♯/A♭ and back to A. And they always go in the same order, wherever you start, and they're always a semitone - one fret - apart. 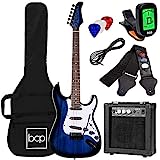 The CAGED System Is Your Map Of The Fretboard

If you can do this, you're already doing better than one guy I tried to teach. He'd got hung up on the notion that there was only one shape for each chord, and he wasn't ready to move on from that and take responsibility for making his own way around the guitar neck.

I can sort of see his point. For beginners, anything past the third fret is unknown territory, and they don't have a map. But that's what the CAGED system is for.

The CAGED system is just a simple way of knowing where you are on the fretboard and what notes will fit with the key you're playing in. Keep it simple, and you can't go wrong.

How? We'll cover that in a hub about the modal system.