Master and Commander - The Far Side of the World

Master and Commander - The Movie

A captivating movie based on the even better "Master and Commander" book series written by the late Patrick O'Brian.

This movie stars Russell Crowe as British Navy Captain "Lucky Jack" Aubrey and Paul Bettany as ship's surgeon Dr. Stephen Maturin. It takes place during the Napoleonic wars when Captain Aubrey is ordered to pursue a French warship and prevent her from sailing into the Pacific to disrupt British whaling.

This is also the first feature (non-documentary) film ever filmed in the Galapagos Islands. It includes dramatic footage of the islands and the unique creatures that inhabit them.

In 2004, Master and Commander won Oscars for Best Cinematography and Best Sound Editing.

It was also nominated for 8 other Oscars including Best Picture, Best Director and Best Visual Effects. The Best Picture winner that year was The Lord of the Rings, but I think this movie should have won it.

Master and Commander - The Far Side of the World (Widescreen Collector's Edition)
This is the version that I have. It includes a great extra feature on the making of the movie.
Buy Now

The HMS Surprise, commanded by Captain Aubrey, is ordered to find the Acheron, a larger French warship, before it can sail around Cape Horn to prevent it from raiding British whaling ships in the Pacific.

En route to intercepting the Acheron, the British are caught off guard and attacked in a fog bank as the roles of hunter and prey are reversed. The wounded Surprise limps away and a dramatic chase continues around the Horn and into the Pacific testing the captain, who is determined to complete his mission, and the crew of the damaged Surprise.

When the Surprise stops at the Galapagos Islands for repairs, the ship's doctor gets a brief opportunity to discover and document some of the islands' unique wildlife before the final encounter between the Surprise and the Acheron. 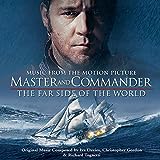 Master and Commander: The Far Side of the World
Unlike most films, there's no music (other than drums beating the crew to quarters) until about 12 minutes into the movie. This soundtrack is full of great classical music containing old and new pieces inspired by the time period and action of the movie.
Buy Now

Learn About the Books

The book series that this movie was based on have been called "the best historical novels ever written" by The New York Times.

To learn more about them and their author, Patrick O'Brian, please visit my other site about the Master and Commander books.

Differences From The Book

There are always plot differences when a book is made into a movie. This one is no exception. Below I've listed a few of those I noticed while reading The Far Side of the World.

There were several major differences in the book that I did not expect. I haven't listed those here because I think they might spoil your reading of the book. Even though the movie took some dramatic liberties with the book's plot, I think it still admirably followed the spirit of the O'Brian novels and was a great movie.

Here is a listing of tall ships available to tour all over the world. It includes information for touring the HMS Rose which played the starring role of the HMS Surprise in this movie.

The Making of Master and Commander: The Far Side of the World
Learn more about the efforts put into getting the historical details of life aboard ship right. Includes interviews with the crew/cast and lots of color photos.
Buy Now

This movie was based off the plot of the 10th book (The Far Side of the World) along with scenes and elements from the first book (Master and Commander).

Across the 21 books of the O'Brian series, there is plenty of material for sequels to The Far Side of the World to be based on. Ever since the movie was released there have been rumors of a sequel but, unfortunately, nothing has come of it.

Should there be a sequel to Master and Commander - The Far Side of the World?

Other Reviews and Movie Info

Read the critics' reviews of The Far Side of the World and its soundtrack.

What did you think of "The Far Side of the World"? What other O'Brian titles would you like to see as a movie? Please leave a comment below.