May I introduce you to singer-songwriter Kevin Ayers and the Whole World?

May I? by Kevin Ayers and The Whole World

Kevin Ayers was a very British singer-songwriter and rock musician held in very high regard by his many fans and by many artists and producers in the music industry.

"May I stop and stare at you for a while? I'd like the company of your smile," sings Kevin Ayers in his song May I? It opens the album Shooting At The Moon, which was released on the Harvest label and is as good a place as any to introduce you to his songs and music.

Here Kevin is in romantic mood and tells how he spotted a beautiful girl at a café and how he approached her. It represents him at his most charming and lyrical best. But a song such as this one represents just one side of his eclectic genius and creative output.

Ayers, who was backed by a short-lived band called the Whole World on this album, also ventures into avant-garde experimental compositions such as Pisser Dans Un Violon. His habit of not being able to stay with a given genre of music must have been a great frustration to his record labels and promoters.

But Kevin Ayers was very much a man who embodies the sentiment of '60s catchphrase "do your own thing." He has certainly done so, and although he never managed commercial chart hits, he has been rightly credited as one of the most influential musicians that arrived in the heyday of flower power and has gained a vast army of loyal fans ever since those days.

The late great John Peel, who often played songs by Ayers on his BBC Radio 1 show, said in his autobiography that "Kevin Ayers' talent is so acute you could perform major eye surgery with it." 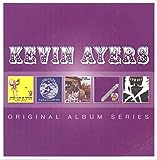 More about Kevin Ayers and his musical background

Kevin Ayers was born in Herne Bay in Kent but his family moved to Malaysia when he was six and came back to the UK when he was 12. His time overseas was later to surface in his songwriting, which features many references to other countries and incorporates a world music feel at times.

As a teenager in the '60s, Kevin became involved in what was to become known as the "Canterbury scene" and had befriended many musicians that were in the area including Daevid Allen who went on to front Gong, as well as Hugh Hopper, Robert Wyatt and Mike Ratledge. In 1963, Robert Wyatt, Hugh Hopper, Kevin Ayers and two others formed the band The Wilde Flowers. Ayers was the vocalist for the group.

In 1965, Kevin Ayers and Daevid Allen went to Ibiza, and it was while away that they met up with Wes Brunson, and American who had inherited a lot of money and who decided to invest some of it in supporting the two musicians. Ayers and Allen went back to the UK and persuaded their friends Robert Wyatt and Mike Ratledge to form a new band that they decided to call Soft Machine.

Both Allen and Ayers were to end up leaving the band and go on to other things, but Soft Machine who now had Hugh Hopper as a member were becoming well known and released an album.

Kevin Ayers got signed to EMI's new progressive music label, Harvest. It was on here that in 1969 he was to release the album Joy Of A Toy, which many people feel is one of his best. It contains very memorable songs such as the haunting Lady Rachel, the philosophical whimsy of All This Crazy Gift Of Time and the beautiful and sympathetic Eleanor's Cake (Which Ate Her), which was written for and about Kevin's friend Eleanor Barooshian (now known as Chelsea Lee) of the girl group The Cake.

In the various stages of Kevin Ayers long and successful career there have been several different band line-ups and also collaborations with other musicians.

When Kevin was fronting The Whole World he had teenage guitarist Mike Oldfield in the band. Mike went on in the years ahead to become a very successful musician and composer in his own rights and is most famous for his album Tubular Bells.

Highly acclaimed producer and musician David Bedford worked with Kevin on many occasions and many song arrangements. Bedford's work enhances The Lady Rachel, for example on Joy Of A Toy.

Kevin enlisted singer-songwriter Bridget St John's help on The Oyster And The Flying Fish on Shooting At The Moon, one of his very fun-filled fantasy songs.

Probably the most famous and at the same time most-discussed friendship and collaboration was that of Kevin Ayers with Pink Floyd founder and fellow eccentric genius, the late Syd Barrett. Singing A Song In The Morning (A Religious Experience) features Syd.

Ayers wrote a tribute song to Syd Barrett, "Oh! Wot A Dream,"which appears on the album Bananamour in 1973.

Among other singers and musicians Kevin Ayers worked with are former Velvet Underground members John Cale and Nico, and Roxy Music's Brian Eno. Kevin also teamed up with guitarist Ollie Halsall, who played guitar for acts Timebox, Patto, and The Rutles.

Kevin Ayers ended up in the '90s living a semi-reclusive life in the south of France, but he kept on writing songs and was tempted out to make a return to music and to record his last album The Unfairground in 2007. Recorded in part in New York and London, The Unfairground has contributions form guest musicians including Euros Childs from Gorkys Zygotic Mynci, Phil Manzanera formerly of Roxy Music, Hugh Hopper and Robert Wyatt, and Bridget St John.

Bridget and Kevin dueted on the love song Baby Please Come Home, which is one of the highlights of an album that shows that Kevin Ayers could still write and perform as well as he ever did when he was younger.

Sadly the world of music was shocked by the news that Kevin Ayers had died in his sleep on 18 February, 2013. His body was found in his bed at his home in the medieval village of Montolieu in the south of France. He was 68 and is said to have died from natural causes.

Kevin Ayers is survived by a sister and three daughters.