This second article on the women who have performed theme songs for the James Bond movie franchise focuses on the British women: from Dame Shirley Bassey, nicknamed the queen for her three entries, to pop singer Adele, who recorded for the latest movie “Skyfall” (not included is Scottish lead singer Shirley Ann Manson of the Alternative Rock band Garbage. The band performed the theme for the movie “The World Is Not Enough” in 1999).

Shirley Bassey was the first female solo vocalist to record a James Bond movie theme song. It was 1964’s “Goldfinger” for the movie of the same name. John Barry, who composed the music for this and a number of other Bond films, was Ms. Bassey’s tour conductor at the time, so he tapped her to record it. The song reached number eight on the United States Billboard Hot 100 chart. Bassey also recorded theme songs for the 1971 “Diamonds Are Forever” film and the 1979 “Moonraker.” Singers Kate Bush -English and Johnny Mathis -American were originally asked to record the latter. Bassey was asked when they turned it down. It was reported that she did not care for the song, but did it because Barry asked.

The Welsh singer was born Shirley Veronica Bassey January 8, 1939 to an English mother and Nigerian father. The youngest of ten children (not all from the same father), Bassey worked in a factory at age 14, while singing in local clubs in evenings and on weekends. Her first professional gig was with the 1953 touring musical “Memories of Jolson,” which based on the life of singer Al Jolson. Her first single “Burn My Candle” was recorded in 1953. Though banned by the BBC for racy lyrics, it did fairly well. Her first number one hit in Britain, “As I Love You” was also the first number one for a Welsh singer. Her “Goldfinger” rendition brought her success in the United States, reaching number eight on Billboard Hot 100. Dame Bassey is twice married and divorced with three children: one adopted son and two natural daughters, one of whom died at age 24. She received the title of Dame Commander of the Order of the British Empire in December 1999 from Queen Elizabeth II. She was inducted into the Grammy Hall of Fame in 2008. Dame Bassey currently resides in Monte Carlo. During this year's (2013) Academy Awards ceremony, she gave a surprised performance, singing "Goldfinger" in honor of the franchise's 50th anniversary.

Lulu was tapped to record the theme for the 1974 movie “The Man with the Golden Gun.” To date, it is the only Bond theme song never to make it onto the Unites States or the United Kingdom music charts. It was noted that composer John Barry hated the song.

The singer-actress was born Marie McDonald McLaughlin Lawrie November 3, 1948 in Scotland. Lulu Kennedy-Cairns, as she is currently known, sang with a local band called the Bellrocks as a teenager. Her first hit came at age 15 with the song “Shout,” which was made famous by the Isley Brothers. She was also the youngest entertainer to host her own BBC television series, “Happening for Lulu” in 1968. She has had a successful career since the 1960’s in the United Kingdom with multiple Top 10 singles. Americans know her best from the 1967 song/ movie “To Sir with Love,” which starred Sidney Poitier as an inner city schoolteacher in England. Lulu married the late Bee Gee Maurice Gibb in 1969. They divorced and she later married celebrity hairstylist John Frieda with whom she has one son.

Sheena Easton performed the theme for the 12th movie in the Bond franchise, the 1981 “For Your Eyes Only.” Composers Mick Leeson and Bill Conti wanted English pop star Dusty Springfield or American Donna Summer (both now deceased) to sing their song, while American band Blondie was hoping that their version would be chosen. The studios went with Easton who, at the time, was riding high from her number one hit “Morning Train” also known as “9 to 5.” Easton is the only one of the Bond women of song to be seen singing the theme in the film. “For Your Eyes Only” charted number four on the United States Billboard Hot 100 and number eight on the United Kingdom Singles Chart. It was also nominated for Best Song at the 1982 Academy Awards.

The youngest of six children, Sheena Shirley Orr was born April 27, 1959 in Scotland. She received a scholarship to the Royal Scottish Academy of Music and Drama where she studied teaching. At night, she would perform with a band in local clubs. Easton has had many accomplishments as a recording artist: two Grammy Awards, 15 Top 40 hits on billboard Hot 100, six gold albums, one platinum, the only artist to ever have a top three hit on the following Billboard charts: R&B, Pop, Adult Contemporary, Dance, and Country. Most of her success came in the 1980’s. Married four times, the first at age 19 to Sandi Easton. Easton became a United States citizen in 1992. She adopted two children: a boy in 1994 and a girl two years later. She currently resides in Nevada. 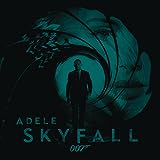 Adele performed the theme song for the 23rd James Bond film “Skyfall” released November 9, 2012. The pop singer co-wrote it with Paul Epworth who has worked with singers Cee Lo Green and Florence and the Machine. They wrote it in the vein of the 1960’s theme songs (like “Goldfinger”) with a 77-piece orchestra. Sources claim that Adele was originally fearful to record because of the “pressure involved in doing a Bond theme song.” However, reviews have been generally positive, and the song did enter the U.S. Billboard Hot 100 chart at number eight.

Adele Laurie Blue Adkins was born May 5, 1988 in England to a 20-year old mother. She began singing at age four and was classmates with other British pop stars Leona Lewis and Jessie J. at BRIT School for Performing Arts & Technology. She got her first recording contract after a friend posted her demo on Myspace in 2006. Her debut album, “19” released in 2008, went double platinum in the United States. At the 2009 Grammy Awards, she won Best New Artist and Best Female Pop Vocal Performance. Adele is the first performer in history of Billboard Hot 100 to have three singles in the top 10 at the same time as a lead artist. She is also the first to have two albums in the top five on Billboard 200 and two singles in the top five of Billboard Hot 100 simultaneously. Adele and entrepreneur boyfriend Simon Konecki had their first child, a boy, in October, 2012. They and her red dachshund Louie currently live in England. To update, Adele added more precious hardware to her collection by winning an Oscar for "Skyfall" in the Best Original Song category at the 2013 Academy Awards.

Which of the James Bond theme songs sung by British vocalists are your favorite?