You can never just watch a Woody Allen movie without entering his thoughts and then you have difficulty ignoring them. Like all his movies, Mighty Aphrodite is sewn as to put you in the head of a dreamy, writer blocked person who knows all the tricks of making an artistic yet real movie and who has an innate ability of making you confuse your own thoughts with his. That's what makes him an excellent story teller.

Mighty Aphrodite manages to make you smile and also think about love, attachment and stuff like that without worrying too much about it. After all, not many of us think about love when dealing with prostitutes. Or do you dare? This is a feel good movie to watch with your loved one that deals with delicate topics by using a not so delicate protagonist.

The film begins with a Greek chorus comprising the likes of Oedipus and Cassandra which might be mildly reflecting the fact the movie draws its inspiration from a mythological tale of Pygmalion. This chorus play the role of narration throughout the movie to highlight the ironical or the comic aspects of the given moment. For the basics, Woody Allen(Lenny) is a sportswriter who is married to a career driven Helena Bohman Carter(Amanda). Not to waste time in pregnancy, the couple make a snap decision(driven by Amanda's wish) to adopt a kid who turns out to be a brilliant one.

There begins the second chapter marked by unspoken tensions between Amanda and Lenny due to "not loving each other the way they used to" or..umm..."not being happy the way they used to" & the likes and also a new thought in Lenny's mind about things better left "unthunk": Who might the possible mother of this good looking brilliant kid be? Enter Mira Sorvino(Linda), who Lenny manages to find after putting some efforts and who also manages to shatter all Lenny's expectations in a matter of seconds by being possibly dumber than his worst expectations and by being a prostitute. This comes as a shock to a "gene" believing Lenny who then decides to make Linda take radical steps from changing her lifestyle to changing her profession. What then follows is succinctly predictable yet bearable narration. Except the ending that marks the irony of the situation.

Oh and did I mention Michael Rapaport(Kevin), who is a boxer and who wants to work in an onion farm and with whom Lenny tries to fix Linda up.

The film showcases good performances by the now famous actresses Helena Bohman Carter and Mira Sorvino. Woody Allen though with all his acting abilities and talent fails to impress us more than he has done in his other roles. One thing which we can draw is that he does not trust anyone with his characters other than himself. Mainly because they are very close to his heart or rather very close to what he is.

Mira has no-doubt played a good enough role to win the Oscar. Her character manages to look and feel sweet even after flaunting healthy cleavage in some scenes. Helena on the other hand looks, feels and plays a simple role(Atleast it feels that way after watching a heap of her Tim Burton movies) without overdoing it. Woody, well he is brilliant but sometimes you are just bored of seeing him as he has always looked more or less the same.

The film highlights and handles the tensions sensitively that many couples go through in some phase of their lives. Besides, this story-teller always manages to teach us a lesson or two about love. Like in any other Woody Allen movie again, Infidelity forms an underlying theme in some or the other way.

The only annoying aspect of the film is the persistence with which Woody Allen tries to make us think the way he does, may it be right or wrong. Unfortunately it becomes more pronounced in such movies in which he himself plays the part. Fortunately though in this movie, his thoughts are right. But well, who am I to judge that?

If you are in love, watch it. If you are heart-broken, watch it. I mean it wont hurt atleast to watch a narration about a prostitute. If you know what love is, watch this or some other Woody Allen movie, doesn't matter.For good or for bad, this man knows some stuff. The film is witty, happy, ironic yet sweet. Mira has made watching this movie a pleasant experience. Although, from start to end, it is an undeniable Woody Allen movie. Lesson from the movies.. Smile and the world smiles with you.

Some funny scenes from the movie 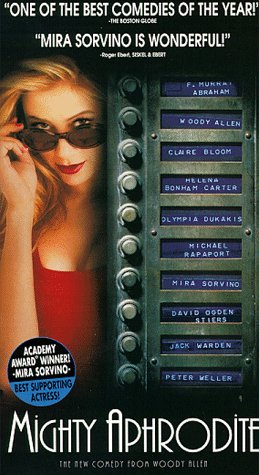