Robert J. Sodaro is an American-born writer, editor, and digital graphic artist who loves writing about comics, movies, and literature.

The Birth of Cool

Miles Dewey Davis, III (May 26, 1926 – September 28, 1991) was an American jazz musician, bandleader, and composer who was widely considered to be one of the most influential and innovative musicians of the 20th century. In spite of his distaste for the word, Davis was at the forefront of several major developments in jazz music (he preferred calling it social music), including cool jazz in the late ‘40s, hard bop in the mid-‘50s, modal jazz and orchestral jazz in the late ‘50s, post-bop in the early ‘60s, and jazz fusion in the late ‘60s through the ‘80s. 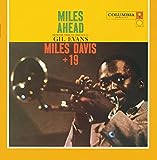 Miles Ahead
This is the Original recording reissued, and remastered, with extra tracks included.
Buy Now

Given that he was such a musical genius and innovative frontrunner it was baffling to many that in 1975 he essentially walked off the stage and all but vanished form the musical scene (until the mid ‘80s). It was during this 5-year period that Miles was reported to have suffered from severe physical and mental pain, and probably just exhaustion as well. Some feel that Miles had created, and changed music so much over the previous 30-year period that he was probably just burnt out. It is this time period — the “Lost Years” — on which that director Don Cheadle focused his film.

"Man, sometimes it takes you a long time to sound like yourself."

The Lost Years of Miles Davis

Named after the trumpeter’s 1957 eponymous album, the film was co-written by Cheadle (who also played Davis), the film tells the story of a few days towards the end of Davis’ “retirement” from the public scene. The virtuoso, has been tracked down by a Rolling Stone writer, Dave Brill (McGregor) who is interested on writing a piece for the magazine about Davis’ imminent return to the music scene. After a bit of a rocky introduction (Davis punches Brill in the face, after which Brill breaks into Davis’ place locking Davis out). However, once things settle out, the pair bond over drinks and lines cocaine, and Brill reveals that he overheard of Davis coming out of retirement leading him to attempt to secure the interview.

Don Cheadle is Miles Ahead

Once the pair has come to a form of détente, Davis has Brill drive him over to Columbia Studios (his record label) where he gets involved with yet another altercation, this time involving the studio chief. Later on, back at Davis’ place, while the pair are downstairs in Davis’ studio, chatting and listening to music (and there is a full-blown party going on upstairs that is being hosted by one of Davis’ hangers-on), someone boosts the tape, sending Davis into yet another rage. What we’ve learned at this point is that Davis is in a very fragile state of mind. He’s drunk, high, and (we eventually learn) pining away for his great love and wife, ballet dancer, Frances Davis (Corinealdi), who had left him some time earlier. As it turns out, the tape was boosted by an agent of Colombia Records so, even partially addled, Davis concocts a plan to get back his music. According to the story, Davis had been sitting on the recording for some time and because he was advanced a large sum of money (and the album is well past due), the studio wants it and wants it now, while Davis wants the rest of what he is promised (which the studio isn’t going to deliver until it gets its album).

Witness the Birth of Cool

For his part, Cheadle delivers a stunning performance of the Jazz great, as we see him — via both flashbacks “present time” set pieces — at various points in his career. We not only get to see him in the studio and gigging out in clubs, but we also get to see the very volatile relationship he had with Frances, including one hyper-critical moment when you can tell that they both realize that while they do truly love each other, things had just gone too far to come back. This is a very compelling film that is both entertaining as well as informative Like Love & Mercy, (Brian Wilson’s backstory) this film fills in gaps in the life of an iconic musician that we, as a fan, were never aware.

Miles Davis — So What