A cute pet spawns a legion of monsters in this 1984 horror-comedy from director Joe Dante and producer Steven Spielberg.

The movie could have been darker, but Spielberg reportedly steered the production in a more family-oriented direction. The result still has a few scares, however, and Gremlins remains a lot of fun today, providing both laughter and screams. 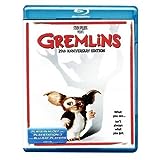 Set at Christmas, the film stars Zach Galligan as Billy, who receives the gift of a pet "mogwai" from his dad, a failed inventor played by the late Hoyt Axton. The mogwai is an adorable furry creature that comes with a few rules that, so it turns out, you really need to be strict about. For a start, don't give it water to drink, and don't get it wet. Keep it away from bright lights and especially sunlight, which will kill it. The most important rule is never feed it after midnight. Billy unwittingly breaks the first rule, causing the mogwai to breed. The mischievous new batch tricks Billy into feeding them after midnight, and the result is little green monsters who set out to wreak havoc on the quiet town of Kingston Falls.

Gremlins is a very nostalgic film. It's full of references to old films, with clips from It's a Wonderful Life and Invasion of the Body Snatchers, among others, each of which influences the movie's atmosphere, albeit in different ways. The cast list is full of actors who built careers in old B-movies, including Keye Luke, Dick Miller, Harry Carey, Jr, and Scott Brady. There are also a few actors who went on to make bigger names for themselves, such as Judge Reinhold and Corey Feldman.

While there's definitely a lot of cuteness going on to draw in the sort of audience that loved ET: The Extra-Terrestrial, at the same time it's a dark film, a black comedy permeated by streaks of ironic, almost sadistic humour. Try suppressing the laughter as the nasty Mrs Deagle (undoubtedly a close relative of Margaret Hamilton's Wicked Witch of the West in The Wizard of Oz) gets her comeuppance at the claws of the gremlins. And try resisting grins of wicked delight as Billy's mother (Frances Lee McCain) takes on two of the creatures in her kitchen, shredding one in the blender and literally popping another in the microwave.

The pre-CGI effects are good, using mainly puppetry, with a few pleasingly quaint-looking sequences of stop-motion animation. There's a fair bit of gore -- if you can call it that. Gremlins spurt green goo instead of blood, so that's up for debate. Plenty of them come to a gruesome end, and, in another nod to fans of vintage horror movies, the final showdown pays affectionate homage to the ending of the Hammer film Horror of Dracula (1958).

Gremlins is a highly entertaining picture, 90 minutes of breathless comic-style tomfoolery that flies by. If you have a slightly twisted sense of humour -- as this writer does -- you may want to add this to your regular list of films for the Christmas season; though it's such wickedly good fun, you might want to watch it all year round.