Movie Review: Rise of the Guardians

Rise Of The Guardians Preview

These Are The People Who Made Rise Of The Guardians

Rise Of The Guardians: The Beginning

Jack Frost is spreading the joy of winter. He makes snow and frost for the children so they can have fun outside.

He gets the kids to sled, ski, ice skate, have snow ball fights, build snowmen and just have fun in the snow. He brings joy to children during the winter.

The only problem is, none of the kids know he is there. They don't see him and they don't believe in him.

Jack Frost wonders why he is even there. The children recognize all the other guardians like Santa, the Easter Bunny, the Sandman and the Tooth Fairy.

At the same time, Santa is at the North Pole getting ready for Christmas when he sees a vision and gets a feeling in his belly that something is wrong.

He sees a vision of the evil Pitch (the Bogey Man). He calls all the Guardians together to help find out what Pitch is doing and to stop him.

Rise Of The Guardians DVD

Rise of the Guardians
Buy Now

Rise Of The Guardian: The Story

Jack Frost is chosen by the Man On The Moon to be the Guardian who stops Pitch from taking over the world.

Pitch has a plan to get rid of all the other Guardians and become the most powerful and only one of them all.

To get rid of the other Guardians powers, he must get the children of the world to stop believing in each of the Guardians.

When children do not believe in the Guardians, they lose their powers and slowly vanish.

He starts by spreading his nightmares to the children. He stops the Sand Man from spreading his happy, peaceful dreams. The Sandman loses his power.

Then, Pitch starts working on the Tooth Fairy. He takes all the little Tooth Fairies who give gifts in place of teeth.

All the children who were waiting for a surprise from the Tooth Fairy woke up disappointed since their lost teeth were still under their pillows. The Tooth Fairy started losing her powers.

Pitch came in and took all of the Easter eggs and hid them. The children went on their Easter Egg hunt and did not find any Easter Eggs.

Rise Of The Guardians Video Game 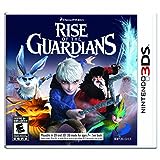 Rise Of The Guardians: The Battle

The Tooth Fairy was upset since Pitch took her fairies and all the teeth that they had ever collected.

Each tooth held memories of the children's childhood up to the point that they lost their tooth. When they stopped believing, the Tooth Fairy would remind them of their childhood and help them believe again.

The Tooth Fairy told Jack Frost that she had had his tooth also. He couldn't believe it! He had been a human before he was a Guardian.

They had all been humans before they were Guardians! He doesn't remember being human at all and wonders where he came from and what his life was like.

He was determined to get his tooth and all the other children's teeth back.

Jack searches for Pitch to find out where he put all the children's teeth, but he was sidetracked. He heard a familiar voice calling his name.

He followed it underground into a large tunnel. There he found all the Easter Eggs broken. He also found the baby Tooth Fairies caged up. Pitch had been here!

Pitch showed up and tried to get Jack Frost to come to his side, but Jack did not want to be feared. He got out of there as quickly as possible and went back to the North Pole.

Once he got there, all the other Guardians found out that he had been chasing voices instead of helping. Everything had gone downhill since he left. They banished him from the group.

Rise Of The Guardians: How It Ends

Jack Frost went into exile in Antarctica where Pitch found Jack Frost and tried to show him how similar they were. Pitch wanted Jack on his team.

Pitch brought Jack's baby tooth and wanted to trade the Jack's staph for the tooth. Jack agreed as long as Pitch did not harm anyone. They made the exchange and then Pitch broke Jack's staph and threw it and Jack down a hole.

While at the bottom of the hole, Jack picked up his tooth and saw his childhood. The familiar voice that he kept hearing was his little sister's voice.

He was able to get his sister to safety, but he fell through the ice and drowned. That is when he became Jack Frost!

Now he knew his history and discovered why he was who he was. Jack returns to the North Pole determined to help the group of Guardians.

They discover that there is still one believer in the world and that one boy is ready to stop believing.

The Guardians make there way to the boy to get him to keep believing. As long as there is one believer, the Guardians will still exist.

The make it to the boy, just before he decides that he no longer believes. He is able to see all the Guardians, including Jack Frost. The children can only see them if they believe in them.

They have made him a believer again and then they make his friends believers again. Little by little the kids believe in the Guardians again! They are safe!

The children decide that they believe in all the Guardians, including Pitch. Although they believe in Pitch, they are not afraid of him. Pitch loses his power and everyone lives happily ever after!

Rise Of The Guardians Poll

Do you still believe in the Guardians?