The Amazing Marvin Suggs And His Muppaphone

Marvin Suggs And His Muppaphone

The Muppaphone is a musical instrument comprised of living pink and orange creatures resembling balls of fluff who cry out in tune when struck by Matvin Sugg's mallet. Before performing, the Amazing Marvin Suggs generally tunes the muppaphone by running through a scale. Each creature is tuned to make one single note, much like a xylophone.

When I was a kid, I just loved the muppaphone. Marvin Suggs seemed like he had accomplished a great thing by training his muppet fluffs into submission. They must be dumb, those little fluff balls. Sometimes they look exhausted and overworked; others they were content and even enthusiastic about their job. They'd just sit there anyway - taking it.

As a kid, I wanted to be him. Even to this day, I still sort of want to be him. When people around me are acting dumb, I imagine standing over them just bopping them in the head to Lady of Spain. It helps.

The Muppet Show - Season One

The Muppet Show: Season 1
This season included the first appearance of Marvin Suggs and the Muppaphone in episode 105, playing "Lady of Spain."
Buy Now

Do you think Marvin Suggs is guilty of cruelty to muppas?

In Episode 315, guest star Lesley Ann Warren accused Marvin Suggs of being cruel to the fluff balls in striking them to make music because they are living creatures. "Of course they're alive!" he answered. "You can't make music by hitting dead creatures!"

"I don't recall where Marvin Suggs came from... probably from one of the writer's meetings. But the accent came from my French friend Phillippe Gentry - I just exaggerated it and made it really annoying. I've always felt Marvin lived in a scuzzy trailer park with his put-upon wife, and he kept the Muppaphones in a cage and would beat them regularly."

Marvin Suggs and his Muppaphones were featured in series 8 of the Jim Henson's Muppets action figure line made by Palisades Toys. It was the first piece of Marvin Suggs merchandise, based on his rendition of "Lady of Spain" from Episode 105 and The Muppet Show (album). Two different Marvins were produced: one regular with a colorful outfit, and a Repaint in silver and black. The regular Marvin comes with a red wall, the repaint with a black wall. The mallets fit in his hands. Three pink Muppaphones and three orange Muppaphones are included with each figure: for the repaint, the pink ones have been painted orange and vice versa. Each Muppaphone is different. 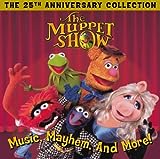 The Muppet Show: Music, Mayhem, and More! - The 25th Anniversary Collection
Track 4 of this absolutely extraordinary cd is, in fact, Lady of Spain preformed by The Amazing Marvin Suggs And His Muppaphone.....and it's spectacular!
Buy Now

Lady of Spain as performed by Marvin Suggs and his Muppaphone

Marvin Suggs appears without the Muppaphone in episode 208.

Season 3 included the another appearance of Marvin Suggs and the Muppaphone in episode 304, playing "The Witch Doctor." Episode 311 features Kermit doing an interview with Marvin Suggs:

Marvin: Ah, yes, but I have to replace them every month or so. They go flat.
Kermit: Flat? You mean, out of tune?
Marvin: No. Flat. Like teeny pancakes.
Kermit: What happens to them then?
Marvin: That is something you don't want to know.