My City and Its People

Street photography is very popular group of photographers and it takes a special type of individual to go into the streets and take shots of people who are not know. In other words photographing strangers.

Yet this can be a good source of inspiration and it can also be used towards a series of photo books each featuring people from a particular city or town. For example an astute photographer, Brandon Stanton, has created a book titled "Humans of New York" featuring photos of New Yorkers from all sorts of life, social standings and cultural groups.

By taking this concept and building upon it you can do the same thing but focusing on your particular location. You can also do some traveling and capture images of people in other cities and then use the images to create some print work like in the case of Stanton's book about his city.

However street photography, to be worth it, will involve communication. You cannot simply go around and take pictures of perfect strangers. If you hide their faces and they are not recognizable then maybe but this will obscure the effect.

We as humans are drawn to other people and being able to see faces, their expressions and so forth is what makes the work interesting in the first place.

You need to build a rapport with your subjects, talk to them, approach them in a friendly manner, explain what it is you are trying to do and you will be surprised as to how many will not only allow you to use their images but may even go as far as making some suggestions of their own and don't forget the added benefit if possible clients for your work later on.

Always carry with you enough business cards that identify you and have your contact information. Offer to provide a sample digital image which is nothing more than sending an email with a picture attachment.

Miami (/maɪˈæmi/; Spanish pronunciation: [maiˈami] [7]) is a city located on the Atlantic coast in southeastern Florida and the county seat of Miami-Dade County. The 44th most populated city proper in the United States, with a population of 417,650, it is the principal, central, and most populous city of the Miami metropolitan area, and the most populous metropolis in the Southeastern United States after Washington, D.C.[8][9] According to the U.S. Census Bureau, Miami's metro area is the eighth most populous and fourth-largest urban area in the United States, with a population of around 5.5 million.[10][11]

Try to include other elements in the shot that help your audience identify the "where" the picture was taken.

For example lets take a look at the first image in this article; it was taken next to the entrance of a popular Cuban coffee shop in the Little Havana section of the city. The words painted on the walls and door might lead some to think that this is in a foreign country.

If you pay attention you can also see some English words and to further help with the identification, the words "Cuban coffee" should be enough to lead your audience to conclude that this is a scene shot in Miami or at least in Florida. After all, name another part of the US where Cuban coffee is synonymous with the city.

The second image on the article shows a scene of a popular music festival held each year in Downtown Miami. Even if the "BY line" didn't name the location by looking at the small portion of the skyline and the royal palms you should at least be able to narrow the list of possible locations plus the attire worn by many shows that it is a warm time of the year.

A little research can clearly name the location for anyone interested in finding out. But you don't even need to research, take a closer look to the right and top side of the image where a sign clearly states "Welcome to Ultra..."

Would you do a project such as this one? 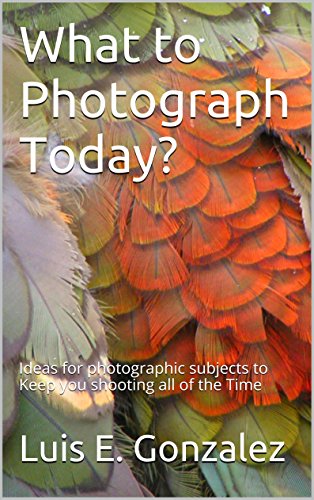 What to Photograph Today?: Ideas for photographic subjects to Keep you shooting all of the Time
Buy Now

Your pictures should be casual and have a relaxed feeling to them and you should also include views of the city.

If doing the project with an article like this one, then including a couple of videos showing what life in your city is like adds more interest.

This is street photography for lack of a better term and your aim should be to show how people in your city behave, what they do for fun, how they go around their daily lives and many other interesting aspects of your hometown.

Your image compositions have to be interesting and not simply look like more of the rest.

Ask your subjects to pose for you but to keep doing whatever they were doing before. Capturing images that are "natural" do often work better than posed ones.

If you have a camera and a couple of lenses; one prime and a zoom, you really need nothing more, except perhaps a flash unit if doing some night shots.

Simply walking around and interacting with potential subjects is the best approach.

People like having their picture taken of that there is no doubt. The barrier that you have to breach is gaining their trust so that they feel comfortable with what you are doing and not think of you as taking their photos for some mischievous purpose in mind.