My Life In Ruins

My Life in Ruins
Buy Now

My Life In Ruins , released in 2009, is not "just another romantic-comedy" with the same old lovey dovey gooey plot about finding true love or one's soul mate. This film has real life messages including how we can learning from our ancient past, how to appreciate historical sites, and how great it is to preserve them for the future generations. The plot deals with real life issues surrounding how adults can grow, improve into a stronger better people-person, no matter what life throws at them. Director Donald Petrie, cast, and crew created a delightfully fun travel comedy filled with awe inspiring Grecian ruins that included the Acropolis, the Parthenon, and the Temple of Apollo.

My Life in Ruins begins with Georgia (portrayed by Nia Vardalos from My Big Fat Greek Wedding ), a Grecian-American who works as a Tour Guide in Greece. She is well educated with a degree in Ancient Studies. Georgia, however, is known by her employer, Lenka (Maria Ripalda), as "the most unfun tour guide" that Lenka has on the payroll. Georgia is unlike Lenka's other employee Nico (Alistair McGowan) who receives rave reviews when his groups fill out the "How was your tour guide?" questionnaire at the end of their trip. Why is Georgia so "unfun"? Nico says it is because Georgia takes her job too seriously and tries too much to educate the tourists about the ancient Grecian sites. Nico believes wholeheartedly that tourists do not want to be educated, could care less about the ruins on the tour, and just want to have fun throughout their stay. Nico barely shows his "Group A" historical sites of interest, instead showers them with a rich tour brimming with fancy Greek restaurants, top of the line hotels, shopping sprees and beach fun under the sun. Nico's group does pay more for their "Group A" tour. Nico being "the very best tour guide" places Georgia stuck in the rut of giving the "cheaper" tour for "those who can barely afford to visit". Lenka deliberately employs the "scariest" looking bearded Grecian tour bus driver for Georgia's tour group instead of the clean cut handsome Grecian hunk one that drives the tour bus for Nico's. Lenka also makes certain Georgia's group rides the older tour bus, the one without air conditioning; forces them to open the windows for "authentic Greek air". This is why Georgia decides to quit being a tour guide after this one last tour. She feels her life could not get any worse, that is until given "Group B from Hades" that consists of every tourist stereotype equating to a group of nightmare tourists for any tour guide.

This particular "Group B" is the toughest to deal with; virtually impossible to keep happy. They are gauche, loud, whiny, irritable, unpredictable and exasperating. They come from diverse backgrounds and definitely do not get a long with each other. The most irritating of this "Group B" is Irv Gideon (Richard Dreyfuss), an American widower, who continues to point out Georgia's shortcomings. Irv aggravates Georgia with his picky snide remarks until she finally has enough and forces having a serious talk with Irv. Georgia determinedly demands the reason for Irv's unwelcome criticism that has been making her feel inept as a tour guide. Much to Georgia's surprise, Irv likes Georgia. He was merely trying to bestow her with constructive criticism and wisdom. He wanted to help her, saw potential as a tour guide in her. Irv also desires to enjoy his vacation without the hostile attitudes the others in "Group B" are displaying toward Georgia. Finding common ground with Irv, realizing Irv is a caring person, leads Georgia into a fabulous friendship with Irv. He becomes kind of a mentor for Georgia which enables Irv to be a constructive influence that teaches Georgia how to be a better people person and still be able in a "fun way" to teach others about the Grecian historical sites of interest without coming across to others as a "boring know-it-all."

Irv and the rest of "Group B" further teach Georgia much about themselves, camaraderie, their aspirations, true friendship and tolerance toward those who are different. Her time with "Group B from Hades" opens Georgia up to a possibility she would normally have overlooked that ends up enhancing her life and gives Georgia great joy where she least expected to find it.

My Life In Ruins is rated PG-13 due to adult themed subject material. It is available on DVD. The 1 hour and 38 minutes in length of this film is definitely not a waste of time, very entertaining with a perfect ending. Even though My Life In Ruins is listed as a romantic-comedy, this is not a "chick flick". As with most movies starring Richard Dreyfuss, this one has enough meat and potatoes for men to enjoy. My husband, an avid Western movie viewer, liked My Life In Ruins . He normally does not care for Richard Dreyfuss, but admitted, "That guy is good."

Great seeing Richard Dreyfuss (What About Bob? ), Harland Williams (Down Periscope ) and Nia Vardalos (also in I Hate Valentine's Day ). Truly awesome having them in the same movie. Highly recommend! 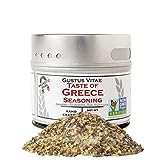