Namie Amuro, while not the most prolific J-pop star in terms of album output, has still released nearly 10 albums over the span of her 20-year career. Her albums can be loosely put into two categories: her early dance-pop produced by Tetsuya Komuro, and her later "hip-pop" styled albums. But in the end, all her albums smoothly transition from one style into another.

(NOTE: Although technically listed under her name, the SUPER MONKEY's albums are not included here.)

"SWEET 19 BLUES" is Namie's debut solo album both under "avex trax" and without any of the SUPER MONKEY's. It is entirely written and produced by TK, and reflects his hard-hitting electro-driven gospel sound of the age. Not only is it Namie's best selling album at over three-million copies, but it was also the #2 album of 1996 (behind only another one of TK's albums) and the #13 best selling J-pop album of all time. It came with four different possible sleeve covers.

"Concentration 20" is Namie's sophomore album, also written and produced by TK. It continues her established sound of 90's era dance music, but with a rockier edge to it. The album has experimentation with reggae and industrial rock. Even though it came a year after her first album, it didn't meet quite the same sales quota, reflecting the downturn in CD sales in Japan. It contains the single "CAN YOU CELEBRATE?" which is the highest selling single by a female solo artist in Japanese history.

"GENIUS 2000" is Namie's third album (first post hiatus) and shows a significant turn in her musical direction. Fewer tracks were written and produced by TK, with newcomer Dallas Austin taking the reins on some of the songs. With this album Namie attempted a more urban sound as heard on the single "SOMETHING 'BOUT THE KISS". It also has her first attempts at softer ballads such as "THINGS I COLLECTED". It's her first album to not sell over a million copies.

"break the rules" is Namie's fourth album and her first one to fully embrace an RnB direction. It's also her last one to feature production by TK (most notably the singles "PLEASE SMILE AGAIN" and "NEVER END".) As a partial result, it's also Namie's first album to not reach #1 on the charts, instead only reaching #2.

"STYLE" is Namie's fifth album and her first after breaking off from TK and fully embracing urban roots. Therefore, the album mostly consists of hip-hop songs with some "regular" pop thrown in. It's Namie's first album to include guests, all of whom are prominent rappers. However, the album was not as well received and is her worst charting and worst selling of her career. The last two tracks are first press bonuses only.

"Queen of Hip-Pop" is Namie's sixth album and the one considered the true start of her new image and song. The title refers to Namie' self-proclaimed style, a fusion of hip-hop and J-pop. To promote the album Namie teamed up with MGM Studios to use the Pink Panther as a logo. The album helped to revive and promote Namie's popularity, as she reclaimed the #2 spot on the charts and sold twice as much as "STYLE".

"PLAY" is Namie's seventh album and her first to have a corresponding DVD release. It managed to not only reach #1 (her first #1 album in seven years, since her album "GENIUS 2000") on the charts but stayed there for over two weeks. The album is described as having an "adult" theme and depicts Namie "cosplaying" as a sexy cop and flight attendant.

"PAST < FUTURE" is Namie's eight album and continues her upswing in sales. The theme of the album was forgetting the past and moving forward, as depicted in the title and the cover art, which shows Namie tearing up a promo picture of her previous year's best album "BEST FICTION". The album had only one single, the hit "WILD / Dr.", but most of the other tracks had a tie-up of some kind.

"Uncontrolled" is Namie's ninth album and her 10th anniversary album. It shows a departure from her old hip-pop style to a more generic dance-pop sound, and featured productions from various European producers. Only four of the tracks were new, and three of them were recorded entirely in English. The songs from the previous single, "GO ROUND / YEAH-OH", were also rewritten in English, making a little under half of the songs on the album completely in English. The cover was taken during / inspired by the 2012 annular eclipse. 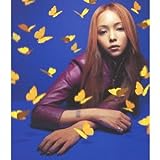