Optimus Prime of the Autobot Transformers 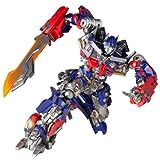 Certainly the noblest living Transformer, Optimus Prime is rivaled by perhaps only 3 other characters in all of comic-dom: Captain Marvel, Superman, and Captain America (granted, in a popularity contest, nobody beats the Kryptonian!).

His loyalty to his beliefs is rivaled by few fictional characters, and he could teach a thing or two to elected officials about commitment. Indeed, Optimus Prime gave up a chance to bring his own planet Cybertron back to life, simply because it would have eradicated all the life on a planet he barely knew. "We had our chance; now it's their time to thrive."

Optimus is often the first and last defense against the aggressor-Decepticons from their shared home planet of Cybertron, which was destroyed in the woes of a titanic battle between the Autobot and Decepticon factions. They bring their fight to Earth, where Optimus and crew lay down their Sparks in defense of all the sentient life on the planet - especially us humans.

The Autobot leader has shown his unwavering colors throughout his over 20-year-run as Hasbro's cash cow and many an 80's kid's personal hero. Why has the royal purple - in his most modern incarnation - and deep red robot captured our hearts and minds so, besides the fact that he's a hard-to-kill gigantic machine?

Primus Transforms into the Planet Cybertron!

Optimus Prime may very well have always been a hero; but, certainly not one known to everyone.

He was a mere scientist at one time on long-ago Cybertron, before the Decepticon hordes would raze the metallic planet to oblivion in their bid for absolute power.

Lord Acton, it would seem, wasn’t only right on planet Earth.

There is a plethora of history behind the Transformers and Optimus Prime; however, the gist of it as relates to the modern 3-part movie franchise is that Optimus became leader of the Autobots back on Cybertron, after a series of betrayals by none other than Megatron.

And so we arrive in 2007, for the first Transformers movie, where the great Prime had sent Bumblebee to Earth – in disguise, of course, as alien robots tend to scare Earthlings, I’ve heard – to protect Sam Witwicky (played by the energetic actor Shia Labeouf in all three movies).

Voiced by the formidable Peter Cullen, who’s been Optimus pretty much from the very beginning, the extent of his nobleness was on full display in the first movie, when he was willing to sacrifice himself to save (mere) humans.

It should have been expected, in retrospect, as his most resounding motto is “Freedom is the right of all sentient being” (unless you’re a cynic; then, this really just means it’s okay to enslave roaches. Just kidding?).

Easily the best movie of the coming three, Optimus persevered – as it should be in hero films – with the help of his quick-thinking friend and ally, Sam.

Transformers Age of Extinction is the fourth installment, and was released in 2014 - the actors have all been changed, but Optimus, the Autobots, the Decepticons and the Dinobots are well-represented. By far the mightiest of the Dino-bots, the legendary Grimlock makes an appearance in Age of Extinction, much to the excitement of long-time fans.

With the rousing scene of Optimus Prime perched atop the mighty Grimlock in the Transformers' trailers, it's expected to be a dazzling film big on special effects - and by all accounts, it truly was. It cost just over $200 million to make; yet has already grossed a whopping billion dollars worldwide just two months after its release. 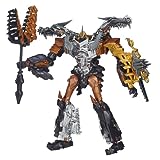 Dark of the Moon served as the forum for the greatest revelation of Optimus Prime’s true nature.

He was given a choice that few Transformers, even among the Autobots, probably would have blamed him for taking the option that left Earth out to dry: restoration of his beloved Cybertron.

For Optimus, however, it was never even a consideration, and he withstood the betrayal of another Prime (Sentinel, who’d arrived on Earth’s moon long ago) to ultimately finish the job he’d started on Megatron’s face, even killing a pleading Sentinel Prime as soon as he was done offing his oldest nemesis.

Please vote in the poll below. As for my money, despite this being Optimus Prime’s party, I went with Superman as the most noble, then Captain Marvel, Prime, and Wonder Woman.

Why, you ask? Well, although Prime is undeniable noble, and one you certainly want on your side, he showed a certain warrior’s ruthlessness in his (albeit deserving, IMHO) dispatching of both Megatron and a pleading Sentinel.

Although I didn't consider it “wrong” (they were mass murderers with an unshakable ideology and couldn't be thrown in jail!), it’s something Superman wouldn't have done.

Edit: Apparently, I was too optimistic about the lengths Superman would go when dealing with an especially deadly adversary. In Zach Snyder's Man of Steel, the Man of Steel actually broke the neck of another Kryptonian - though many would argue Superman had no choice in the matter.

It appears that in Age of Extinction, Optimus Prime exchanged his brutal dual ion blades for a formidable bastard sword. It has more heft, the better to cut down Decepticons with!

Hopefully, the ion blades make a return, while the mighty Optimus keeps this sword in his growing arsenal.

Even better, perhaps in Transformers 5 somewhere down the line, Optimus will use his battle axe as his primary weapon - an ode to the cartoons of yesteryear.

Who is the noblest hero of them all?

Who is more powerful?

Skipping much of the inanity of Revenge of the Fallen, and focusing on Prime’s exploits, we find the mighty Autobot leader teaming up with humans to covertly root out and destroy Decepticons in all their myriad forms.

It is in this movie that the extent of his fighting skill is truly on display (though it would arguably be surpassed in the 3rd installment). Dark of the Moon was a ferocious display of the true calling of Optimus Prime – to lead, and to fight.

Prime was taking out Decepticons 5 times his size left-and-right, up until a one-on-five in a forest somewhere that he - puzzlingly - fought alone. (On a side note, it's clear from the trailers of Transformers: Age of Extinction that Optimus once again needs help from outside the Autobot ranks).

There, the great bot finally fell. Of course, he would be revived at the end; and further, attain a sort of godhood by combining with the dying original air-superiority jet – the SR-71 Blackbird Transformer known as Jetfire.

It gave Optimus the only thing he lacked in battle – flight capability. Well, that and a power boost, with which he added the main boss to his list of kills. The Fallen fell; that’s what happens when you try to destroy the Prime’s adopted home planet.

Jetfire Transformers was immortalized in the incredible combination that his vaunted parts formed with Optimus, and the Autobots regard him, to this day, as one of their own in the never-ending fight against evil, and in their unshakable mantra that all sentient life deserves freedom. 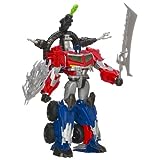