In the last chapter of Page to Screen we looked at three forthcoming movies based on popular books ( Cloud Atlas, Abraham Lincoln:Vampire Hunter and The Wettest County in the World) In this section we will look at three more.

The journey from Page to Screen, as many authors and filmmakers will testify, is a tortuous one.Some of these enjoy a relatively smooth transition to film production while others do not.

A book may have been optioned for a film even before publication. The term optioning is used to indicate a contractual agreement entered by a production company with the author that gives exclusive rights to filming the material within a specific time period. A specific sum is paid to hold the rights. The book will be published separately by a publisher and may even enjoy a level of success based on the buzz surrounding the interest from Hollywood..

Many books are also optioned after they enjoy a level of commercial success as the popularity of the book with the reading public may attract film makers.

Optioning doesn't necessarily always result in a movie or TV adaptation. The slow process of creating a film product may stumble at many hurdles resulting is what is commonly known in industry circles as development hell. Many books get tied down by an option and where one studio or company fail others may be interested in buying the option or may simply wait for it to expire to deal directly with the author.

Fans of some popular books are often frustrated by the lack of progress in some very high profile projects that are announced but never make it past the starting gate. This is a common scenario. There have also been some very successful movies in the past that were rescued from the jaws of development hell by another studio and fostered to completion. I suppose in a multimillion pound industry such leaps of faith and potential hurdles are common due to creative and financial pitfalls.

While some projects are easy to film, there are others that look very good on paper but need a colossal amount of visioning and revising to suit the screen. It is no wonder that many lovers of a good book are equally likely to shiver with anticipation or shudder with fear at the thought of a film adaptation.

For these forthcoming film adaptations, I don't know whether you will shiver or shudder : 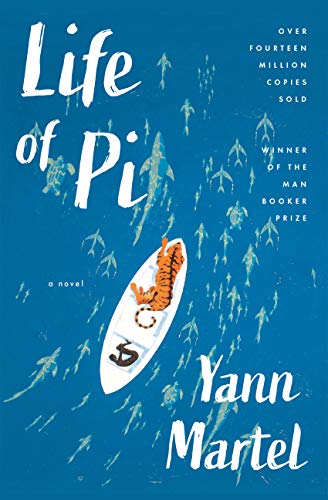 Life of Pi is a multifaceted novel written by Yann Martel and published in 2001. Immensely readable yet difficult to pin into a genre, this is one of those rare works of fiction that is at once head scratchingly deep and utterly unputdownable. Initially rejected by several UK publishing houses, it was picked up by Canadian publishers Knopf. It went onto international fame, gathering a clutch of awards including the Man Booker Prize for fiction in 2002.

The story is in three sections, narrated as the reminiscences of 'Pi' whose original name is 'Piscine Molitor Patel' (he was named after a French swimming pool!). Fed up being teased at school, (Pissing Patel!) he shortens it to Pi while growing up in Pondicherry, South India. Pi's childhood is full of wonder and discovery as his family runs a zoo in Pondicherry. He is a Hindu who discovers the faiths of Islam and Christianity and decides to follow all three. The second half of the novel involves Pi's family moving the 'zoo' to Canada and go on board a Japanese freighter with their animal cargo. After a disaster hits, the ship sinks and Pi finds himself in a lifeboat with a orangutan, an injured zebra, a hyena and a Bengali tiger called Richard Parker, adrift in the vast ocean.

What follows is a surreal yet thrilling adventure at first in the confines of the lifeboat and subsequently in an island that Pi finds himself washed up. The third part involves Pi being picked up by Japanese maritime officials who try to interview him on the actual events leading to and following the shipwreck. There is a hint that Pi's version of events may be a coping strategy for what actually happens. It may well involve being adrift in the boat with his mother, the ships cook and an injured sailor and may involve a gruesome cannibalistic act. You have the read the wonderful book to find out how captivating the many layered narrative is.

Life of Pi - the Film

Currently in production and being directed by Ang Lee ( Brokeback Mountain, Sense and Sensibility, Crouching Tiger, Hidden Dragon ). The film has been in development since 2002 and has had various screenwriters and Directors involved ( Night Shyamalan, Alfonso Cuaron) in attempting to tame the difficult narrative to the film medium.

Based on a screenplay by David Magee( Finding Neverland ), the film stars a new actor Suraj Sharma in the role of 'Pi' and also stars Tobey Maguire as the author Yann Martel ( whose attempts to track down Pi to get his story form the start of the novel) , Irrfan Khan as the adult Pi, Gerard Depardieu as the ship's cook, and Tabu as his mother.

The film is nearing completion and is slated for a November 2012 release. May well be an awards contender.

This 'Great American Novel' by F Scott Fitzgerald is set in the summer on 1922 when America is enjoying post war economic prosperity. Old money and new money are colliding and mingling in Long Island.

The bootleg industry was enjoying a boom due to the prohibition and it makes a millionaire out of many. The novels protagonist, Nick Carraway, returns from the war and rents a house in West Egg, Long Island, next door to the mysterious 'Gatsby,' a millionaire host to grand parties. Nick's cousin Daisy and her husband Tom Buchanan live across the bay. As Nick tries to set his life back in order after the war, he becomes both an observer and participant in the tumultuous lives of the Buchanans. He meets the mysterious Gatsby who rarely attends his own parties and soon comes to know of his unrequited love for Daisy.

Eventually Daisy and Gatsby meet, and over the course of a few more parties their lives implode when the past loves and present misdemeanours collide.

Initially not received as well as Scott's other novels, The Great Gatsby was subsequently rediscovered as a landmark work of American fiction. It has already been filmed four times, the most famous previous version being the one starring Robert Redford as Gatsby and Mia Farrow as Daisy in 1974. It starred Sam Waterston as Nick Carraway. The script was written by none other than Francis Ford Coppola.

The Great Gatsby- The Film

The forthcoming film by Baz Luhrmann ( Moulin Rouge, Romeo and Juliet, Australia) features an all star cast and is being produced in a lavish scale. Luhrmann's eye for visuals and spectacle are aptly matched by the opulence in the script. With a dream cast of Leonardo Dicaprio, Carey Mulligan, Toby Maguire, Joel Edgerton, Isla Fisher and Amitabh Bachchan, the film looks like a great mix of period drama and visual tour de force.

Filming is complete and it is scheduled for a Christmas release right in time for the Oscar season.

Thanks to the success of the Twilight Saga, Stephenie Meyer is hot property. In this scifi-romance, the story is of a future where most of humanity falls host to an alien race called 'souls' who take over their host bodies. Predictably a group of rebel humans exist who evade capture by the souls. Melanie 'Mel' Stryder is one of them. In the course of the story Mel is captured and is infiltrated by a soul called Wanderer, who realizes that Mel is not the usual host with an element of her own conscience remaining behind with free will.

Wanderer or 'Wanda' as the humans come to call her is a restless soul having already inhabited several other hosts in other planets. The relationship between Wanda and Mel become the central piece of the story and eventually to the redemption of humanity itself.

The Host was a nice departure for Meyer from her Vampire romances and was received very favorably by the readers. It became an international bestseller since its publication i May 2008 and it wasn't long before Hollywood came calling.

Writer Director Andrew Niccol ( Gattaca, Truman Show, In Time ) has a good pedigree of making intelligent movies with science fictional themes. His team up with Stephenie Meyer should be interesting.

Filming is under way with a cast including Saoirse Ronan ( Atonement, Lovely Bones, Hanna ) as Mel, Diane Kruger and William Hurt, Frances Fischer and Max Irons.

The film is scheduled for a march 2013 release and a teaser trailer sets the tone:

Which of these Three Films would you definitely want to see?