Photographing With a Crystal Ball

Have crystal ball will travel. No I am not referring to telling the future using a crystal ball but about doing refraction photography.

Find a crystal ball, get creative and you can create really nice looking images that will show refractions and this can be done during the day or night plus you really don't need fancy equipment .

If you can get a crystal ball you can basically start to create nice and strange images by capturing the reflection of subjects as the light passes through the glass ball. The size of the ball does not have to be large but a medium size one works rather well .

When the technique is applied well, refraction photographs create compelling images that will leave your audience saying WOW and awaken their curiosity.

Keep in mind that the smaller the crystal ball the more difficult the shoot will be plus with a small ball you will also need the aid of some specialized gear like a macro lens, tripod and a mechanical shutter release.

Here are some basic tips for getting your refraction images to come out well:

This technique works quite well at night since you can capture images of the city lights and traffic quite nicely.

Keep in mind that because the images that your lens will capture are refractions they will show up upside down but this adds to the WOW factor.

Here is the technical explanation of what refraction is , but if you have seen a stick midway into a water source, what you see is not really a reflection but a refraction. In other words since light travels more slowly in water than in air, the light bends.

Refraction is the bending of a wave when it enters a medium where its speed is different. The refraction of light when it passes from a fast medium to a slow medium bends the light ray toward the normal to the boundary between the two media. The amount of bending depends on the indices of refraction of the two media and is described quantitatively by Snell's Law.http://hyperphysics.phy-astr.gsu.edu/

In essence you are doing sorts of a macro shoot but unlike macro photography, you don't need to use a tripod, rarely need to get super close to the subject and don't need extra light aimed at the subject. You are basically using a piece of glass in the form of a ball much like a lens that captures the image of what is placed in front of it.

This does not mean that you will never use a tripod, in most cases you can prop yourself and by using a zoom, get good results.

But there may be occasions where the subject is so far from your gear or so intricate in its details that you may want to get close to the ball and use a true macro lens and tripod to help stabilize the shot.

Always keep the unexpected in mind and better be ready and not need it than not ready and need it thus end up losing a shot.

There are many ideas to keep you shooting but ever so often you might fall into a rut and assume that you have photographed everything or there are simply not enough subjects that interest you.

This technique allows you to try the same subjects that you have probably photographed before but adding a new dimension and way of doing things. Besides being fun it allows you to get creative in ways that you might not have thought off before.

If you have a medium zoom lens, anything from about 80mm to 200mm will do, or even just a macro lens, finding a crystal ball is not that hard. Many art supply stores have them and so do many home decor ones and places like Amazon have very good deals on clear crystal balls.

Just make sure that it does not come attached to a mount. You need a ball that is free standing as the support may interfere with the shot.

Also bring along a lint free cotton rag to wipe the ball before each shot. Your fingerprints will show,trust me on this one, even if you don't see them at first they will be visible when you look at the final image.

So get out there with your shinny new crystal ball, explore and above all have fun! 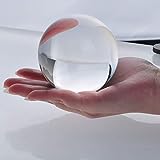