Best Things to See at Glendalough Monastery in Ireland

With a biology degree and two boys who are young musicians, Leah has researched the developmental advantages of music for young children.

The beautiful ancient ruins of Glendalough (pronounced glen-da-lock) sit in a small glen between two lakes in County Wicklow. St. Kevin founded the monastery around the year 498, and attracted many followers. His fellow monks and scholars were deemed “fighting knights,” though their only “fights” were with the pen and book: the monks of Glendalough fought personal temptation and were introspective scholars. St. Kevin died around the year 618, but the monastery continued to thrive.

Sometime around the year 1131, the magnificent “Book of Glendalough” was written. Manuscripts prior to the Norman invasion are rare, and this book is one of only three major works to have survived the test of time. It currently carries the rather dull title, “Rawlinson B 502,” and there is some dispute whether the second portion of this tome is the Lebar Glinne Dá Locha (Book of Glendalough).

The Upper Lake at Glendalough

Glendalough literally means “glen of two lakes,” and a walking path has been placed for tourists to travel the length of the glen. The upper lake is absolutely gorgeous, and has a mirror-like quality on calm days.

There are many buildings in Glendalough, from the ancient “gateway” stone arches to the magnificent stone tower.

The cathedral at Glendalough has been modified over time – the sacristy and the area around the altar were added in the 12th-13th centuries. Many of the grave stones around the cathedral also date from this era.

The Round Tower at Glendalough

Glendalough also has a round tower. Round towers are found primarily in Ireland, though there are three towers in Scotland and one on the Isle of Man. The exact purpose of these medieval towers is not quite clear, but they housed a bell and are nearly always found associated with churches or monasteries. The bell towers could act as lookout points and as a refuge during times of attack. The tower at Glendalough has a door about 1/3 of the way up the tower, and the resident monks could pull up the ladder to prevent invaders from getting into the tower.

A Bell Tower and Sanctuary

The round tower at Glendalough is made of mica slate. Standing 103 feet tall (31 meters), the bell in the tower could call pilgrims from afar

The tower at Glendalough was struck by lightning in 1876 and the roof had to be rebuilt. The original stones were used to reconstruct the conical roof, and the structure has been sound since that point in history.

A high door prevented intruders from entering the tower, and several windows are cut into the tower to afford views of the entire valley.

The area around the upper lake at Glendalough should not be missed: the area features several trails and a waterfall, in addition to excellent rock climbing activities on the local boulders.

The waterfall located by the upper lake is called the Pollanass waterfall, and the stream winds its way through the Glendalough valley. This waterfall is easy to hike to, as the trail winds gently uphill. The entire trail length (marked as the "Bronze Trail") is only 1.24 miles long. After winding through the woodlands, the trail leads visitors to St. Kevin's Cell and to a scenic viewpoint above the upper lake. Visitors should consider stopping by Reefert Church at the end of their hike, as it is well worth the short side-trip.

St. Kevin's Bed is located on the purple route, and is a slightly longer hike at 3.1 miles. St. Kevin's Bed should not be confused with St. Kevin's Cell - the "bed" is an ancient man-made cave. It is believed that this space was used for sleeping or for private meditation - the approach to the cave is difficult, and hikers should take caution. A short passageway leads to the inner cave, and the passageway is only 3 feet high by 2 1/2 feet wide. The interior of the cave is 3 feet high by 4 feet wide.

Part of the Wicklow Way

For adventurous hikers, the Wicklow Way (an 82 mile long hiking trail) winds through the valley. The Wicklow Way can be started in Rathfarnham (a suburb of Dublin) and ends in Clonegal, County Carlow. For those who prefer shorter walks, the clearly marked trails near the upper lake are an excellent way to see the valley. Travelers to County Wicklow, Ireland should not miss Glendalough -the ancient monastery and beautiful countryside are stunningly beautiful. 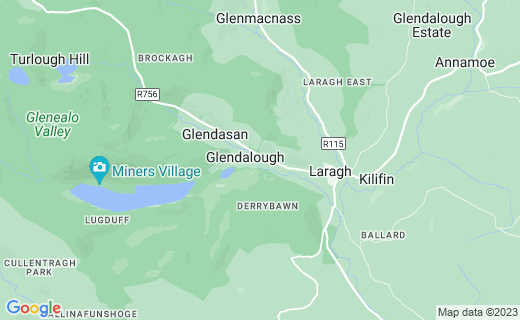